A dog returns to his vomit

The misrepresentation of Janet Frame by Patrick Evans rears its ugly head yet again: the play Gifted based on his fan fiction novel 'about' Frame's friendship with Frank Sargeson will have a season soon at Circa Theatre in Wellington New Zealand.

The novel and the play deliberately distort the historical facts in order to make the audience "see" Frame the way Evans wants them to.

This might seem clever, but a lot of people are asking why anyone would want to go to all the trouble and expense of staging a fake representation of a major cultural figure like Janet Frame.

What makes it OK to treat Janet Frame's memory like this, falsifying her story for cheap adolescent laughs?

Didn't Janet Frame suffer enough at the hands of New Zealand already? Apparently not. Even her death doesn't halt the vendettas of certain men who have spent decades now trying to persuade the rest of us that she was crazy and her work was overrated.

Her continued success does rather seem to infuriate them. 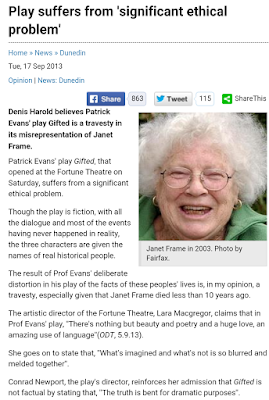