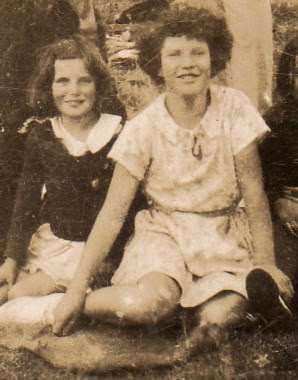 June and Janet camping at Rakaia, 1937
My mother June Gordon died on July 12th 2008 at the age of 80. She was the last-lived and the longest-lived of the five Frame children. June and Janet were great friends, life-long companions who supported each other through their crises and celebrated each other's joys and successes. They often lived near each other, and though they both occasionally exhibited flashes of sibling rivalry, they never fell out.
At the funeral I said: "You can learn quite a lot about Mum’s life from her famous sister's autobiographical trilogy, but there is one book of Janet Frame’s that will NOT give you any good biographical data about June, and that is the novel Owls Do Cry."

A great challenge Mum faced was to have been widely assumed to have been the character 'Chicks' in that novel. The character is drawn satiricially, even cruelly, of a materialistic, vain and shallow person, actually very unlike Mum - but strangers were willing to believe it was her based on a larger myth about Janet Frame, that her fiction was documentary rather than the creative work of imagination it actually was.

Many details about Chicks/Teresa confirm that she was not solely drawn from June – including her marriage to a local boy – but even so several commentators made ignorant assumptions that for a time cemented in the travesty. Janet said often and emphatically that the portrait of Chicks was not intended to be of her actual sister, and Mum eventually forgave Janet for using enough of the details of her life to mislead people into thinking it was an accurate portrait.
The early tragedies they had experienced had thrown them together in a closeness and a loyalty that never wavered. Janet was always included as a treasured member of our immediate family and I'm deeply grateful to my mother for sharing Janet with me (and me with Janet) and for including me in their friendship. 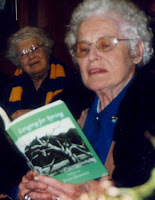 Janet being supportive at the launch of June's book of poems, August 2003

Today's Guardian contains an article by Geoffrey Moorhouse about his experience of finding himself and his family fictionalised in Janet Frame's posthumously published novel Towards Another Summer. His quite reasonable opinion is that the Thirkettle family (based on the Moorhouse family) are "simply included as a context, as an amiable family who are for the moment propping [Grace Cleave, the novel's protagonist] up", and that they were merely being used as a backdrop for the wider preoccupations of the novelist:

"Frame was reworking a theme she turned to time and again, of the Outsider struggling to find a way in."

I heartily agree that of course the author's observations of the real family were only a leaping-off point for her rich imagination. Unfortunately Moorhouse does not seem to afford Janet Frame the luxury of also having fictionally shaped and exaggerated her own character Grace Cleave. Moorhouse quotes his former wife as saying of "Frame/Cleave": "I wish I'd realised how desperate she felt, but how were we to know?"
Alas they allow Frame's character to be trapped by the biographical fallacy whilst also ensuring their own immunity to it.
Of course there is no one-to-one correspondence between the Moorhouses and the Thirkettles. (How could there be? Frame wasn't a mind reader!) But neither is there a one-to-one correspondence between Grace Cleave and her creator Janet Frame, who has in this novel, as in her other fiction, carefully fashioned her material and all of her characters in order to better serve her literary goals.
Posted by Pamela Gordon at 12:43 PM No comments:

Praise for the Keepers of the Frame 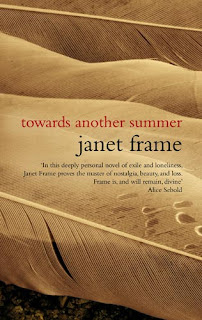 The Observer review of Janet Frame's posthumously published novel Towards Another Summer, released today in the UK by Virago, is a brilliant review of a superb novel:

"The novel is exciting for its language - it plays with poetry, magical realism and metaphor in genuinely daring ways - and for the way it embraces themes that will later be central to Frame's best work: the dichotomy between inner and outer worlds, between fantasy and reality, between innocence and experience."

But reviewer Rachel Cooke also provides a heartwarming affirmation for the efforts of the Frame Estate to balance the wishes of the author with the appetites of the audience. She notes that sometimes the estates of great authors seem to make questionable decisions in their rush to publish inferior or leftover material. This is indeed something the Janet Frame trustees are aware of and extremely keen to avoid, and it is gratifying that Cooke recognises it:

"It feels surprisingly right to hold Towards Another Summer, with its modest, non-attention seeking cover, in one's hands. It is a short novel, but a numinous one. This time, the keepers of the flame did the right thing."