Another accolade for Janet Frame's Owls Do Cry - it was selected by the Guardian as their paperback fiction choice for this month (March 2016):

"Our fiction choice this March is the dazzling and under-appreciated classic Owls Do Cry by New Zealand’s finest author, Janet Frame. Just released in a brand new edition, this was her first full-length work of fiction, originally published in 1957. A hugely innovative work at the time, it is now considered a modernist masterpiece.

Poetic and experimental, Owls Do Cry recounts the story of a poor and tragedy-bound family, gently exploring mental health, poverty and loneliness. It was one of the first novels to deal with life in a mental institution, drawing similarities to Mrs Dalloway, The Bell Jar and One Flew Over the Cuckoo’s Nest – the all-time greats alongside which Owls Do Cry earns a worthy place. Informed by the author’s own time in such institutions, it skilfully allows the realistic narration of events to drift into evocative and dreamlike prose.

A sombre and, in places, heart-breaking story, Owls Do Cry is beautifully written and affecting, and we think will stay with you long after you turn the last pages."


Posted by Pamela Gordon No comments:

When I was at school we walked
two by two in a green crocodile,
with numerous legs the colour of
peanut butter, green mossy hats on top
and on each hat a dove.

I rejoiced in a group of trusty friends
who have lasted all my life.
We found boys pretty fascinating.
Wise teachers instilled in us the art
of listening, inside and out.

I struggled with the Pythagoras,
enjoyed the Law of Moments,
glimpsed history's deep currents
beneath the surface of the present,
learned languages, loved poetry.

In the school library, I first
encountered Janet Frame. One day
walking home along Highgate, reading
'The Edge of the Alphabet' (I think)
I collided with a lamp-post.

At the heart of it all is Columba,
a saint's faith shining from an open book,
a beacon. Sacred his gift
to the island-dwellers: a simple church,
the habit of prayer.


Poet Cilla McQueen's tribute to her school days at Columba College in Dunedin has been published to mark the college's centennial celebrations. Cilla kindly sent me a copy of the poem and gave permission for it to be reproduced here. She said:

" Sending you this to show that Janet Frame's work had quite an impact on my literary development!"

I recently posted Elizabeth Smither's report on her NZSA Janet Frame Memorial Award. Cilla McQueen is another of the former New Zealand Poet Laureates who is happy to acknowledge her debt to Janet Frame's influence and example.

Janet Frame's contribution to an aspiring poet's career did not always deliver such a physical impact!

Cilla McQueen's memoir In a Slant Light is to be published this month by Otago University Press. 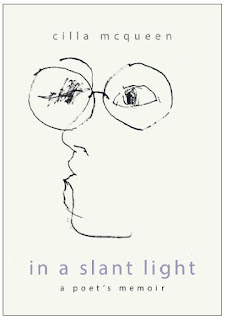 
When I received news from Claire Hill that I had been awarded the Janet Frame Memorial Award for Literature for 2014 I not only felt exceptionally honoured – there is no other name that could adorn an award and give me more pleasure – but I also found myself treasuring personal memories of Janet, some notes I had received from her on green paper, a meeting at her home in Stratford (and the easy and rapid way we conversed). Since that time I also had the pleasure of launching her correspondence with Charles Brasch in Dear Charles Dear Janet at the Gus Fisher Gallery. Most of all though the award and what it signified brought me closer, not just to a greatly admired writer, but to one who understood fully how precarious a writer’s life can be. The generosity of the grant of $3,000 and the open-ended way in which the writer could decide to use it (on buying a computer or buying time or travelling) was the best kind of support a writer can receive.


I decided to do what I imagined Janet would do in a similar circumstance: simply keep going at the work in hand. In my case this included a new collection of poems: Night Horse which I am hoping to submit for Auckland University Press for 2017; writing some new stories; and working on a further draft of a novel which I had started in 2013, abandoned, and then decided to re-write. I worked on these three projects simultaneously, sometimes concentrating on stories, never letting the poetry writing lapse, and, once I was working on the novel producing a quota of words each week. Janet gave me the impression of working on different characters in different rooms in her house – I think she said as much when she was showing me around.


The other benefit of such a grant is an increase in confidence: I certainly felt this. Though I worked across several genres and wrote reviews and reports and went on mentoring students I did all these things with increased pleasure and application simply because I was the recipient of this award. It is an award that brings a welcome gravitas.


Now that the writing year is nearly ended I realise I am working in the same pattern as I was when I received news of the Janet Frame Memorial Award last October. The award has been both a recognition and a consolidation; I think it echoes the way I imagine Janet herself worked: writing as a task and a vocation, a steady application, concentration and attention to detail and accuracy.


It has been a great personal pleasure to have held this award. I don’t think of it as being finite, or confined to merely one year: I am sure the benefit will last through my whole career as a writer.


Many thanks to Jackie Dennis, CEO of the NZ Society of Authors, and to Elizabeth Smither for permission to reproduce this report here.
The NZSA Janet Frame Memorial Award for Literature will be offered again in 2016. (See the link for more details.)
ELIZABETH SMITHER is a former New Zealand Poet Laureate and will take part this week in the event A Circle of Laureates at Wellington’s New Zealand Festival Writers Week: Friday 11 March, 7pm, National Library of New Zealand.