Our colleagues at the charitable trust that cares for the Janet Frame House in Oamaru have sent us this poster for their upcoming literary weekend taking place from Friday February 16th - Sunday February 18th. The weekend is a very worthwhile annual event organised by  the Friends of the Janet Frame House and they have hosted a parade of excellent Kiwi literary talents over the years including: Fiona Kidman, Greg McGee, Anna Smaill, Philip Temple, Diane Brown, Owen Marshall.

As an aside, I'll mention that Catherine Chidgey is the most recent recipient of our own Janet Frame Literary Trust Award. As a novelist she is at the height of her powers.

The pair are not to be missed if you are in Oamaru next week, booking information for their discussion "That Inviolate Place" at the Oamaru Opera House on Friday night is available at:

Janet Frame wrote, “…there must be an inviolate place where the choices and decisions, however imperfect, are the writer’s own, where the decision must be as individual and solitary as birth or death.”
We get an exclusive glimpse behind the scenes with two of New Zealand’s leading writers; Catherine Chidgey and Kate Camp – award-winning writers at the top of their game.
With each highly acclaimed writer interviewing the other, expect an intimate evening of shared good humour, spontaneity and revelation.
Writers and readers alike will delight in this exclusive insight into the makings of world class literature.

Unfortunately I'm told the Saturday writing class is sold out, but the free picnic on Sunday at the house sounds like fun. 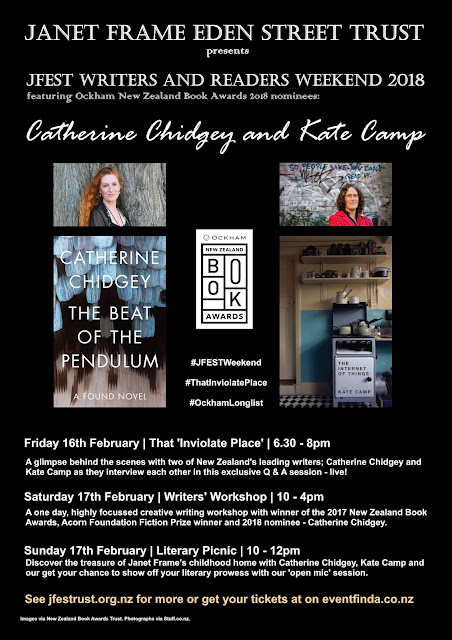