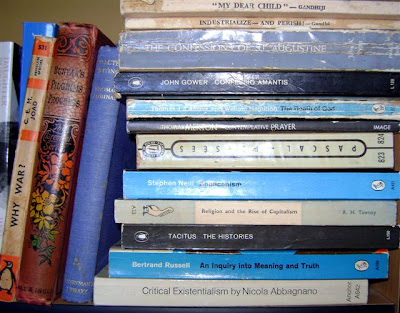 Here's another small selection of books from Janet Frame's well-thumbed and extensive personal library.
It's no secret among authors that you have to be a reader before you can be a writer. 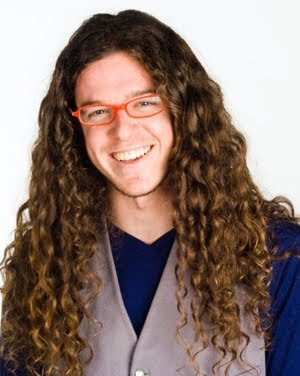 Alex Taylor, composer and musician, has been inspired by Janet Frame's poetry to create a piece called Four Landscapes (2008). The Janet Frame poems were "The Icicles', 'The Stones', 'Moss', and 'The Birch Trees' all from Janet's bestselling posthumous poetry collection The Goose Bath.

The astonishing Frame poem 'The Icicles' is a small piece that packs a powerful message about identity. It's well-turned, and turning out to be a classic; it's been a favourite for quotation requests and for musical adaptation.

And the last lines of 'Moss' always haunt me: 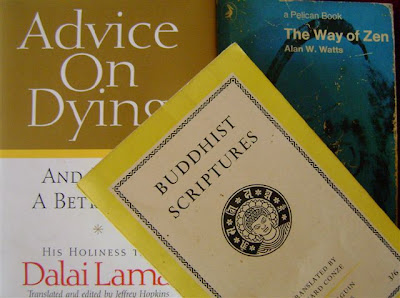 Photograph: Some Buddhism-related books
from Janet Frame's personal library
A couple of months ago I received a query about Janet Frame in the form of a comment on a blog post. The questioner wanted to know whether any "books she left after her death" might confirm the "hypothesis" that Janet Frame had an interest in Buddhism.
In my reply comment I was able to confirm, from almost fifty years of close relationship with Janet Frame, that yes indeed, she had an interest in Buddhism. In fact, she had at one time identified as a Buddhist. I of course do not need to refer to any of Janet's books as 'evidence' for a fact I know about one of my closest friends from personal experience and from the countless conversations we had over the years, on religious and philosophical topics. But I got the idea from that enquiry, that it might be quite nice to pick out some of Janet's books from time to time and feature them on this blog. I decided to start with two or three of her Buddhist books. I can't believe that it is 2 months later and I haven't had a moment to devote to this little exercise until now! I hope to make this a regular item for the pleasure of Frame fans as I'm often asked what Janet liked to read. (The short answer is "everything". I have never known such a voracious and intelligent reader. And she didn't skim: she read constantly, steadily, and retained the information too. But of course she did have favourite books that she regularly reread - eg Pepys Diary - so I do hope to be able to feature some of these.)
As well as her own interest in Buddhism which began at least during her university years in Dunedin in the 1940s, Janet had more than a handful of close friends who were Buddhists or Buddhist sympathisers: notably Peter (EP) Dawson and Ruth Dallas. (There are several other of her friends with Buddhist leanings still living, whose privacy I do not wish to disturb by naming them here.)
Whenever the topic of Buddhism was raised, as it often was, because I myself also have identified as a Buddhist, or at least as a sympathiser, Janet would remind me: "I used to be a Buddhist." And at least once in her last years she continued, "And I suppose in a way I still am."
Janet and I often discussed religion and philosophy - we studied Catholicism together in the late 1970s - and we did agree that it was possible to be aligned to Buddhism as well as adhering to another religion or philosophy. So at one stage I referred to myself as a "Zen Catholic".
If one needs proof for the beginnings of Frame's interest in Buddhism during her student years at the University of Otago in Dunedin, try Chapter 3 of her second volume of autobiography AN ANGEL AT MY TABLE:
"I had explained to Aunt Isy that I ate very little, I was a vegetarian (I had been studying Buddhism)"
Janet often said that it was while she was living in London in the early 1960s that she was most serious about identifying as "a Buddhist". Her copy of the Penguin Classic BUDDHIST SCRIPTURES (pictured above) was printed in 1960 and still has the bookmark from the shop where it was bought, in Norfolk, near where Janet's pacifist friend Peter (Elizabeth) Dawson lived. 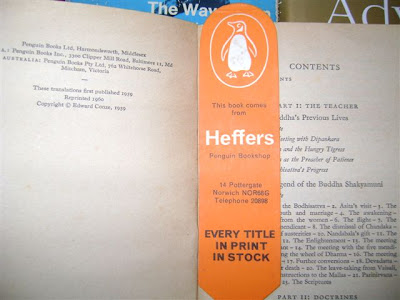 Faces in the Water on Guardian Top Ten List 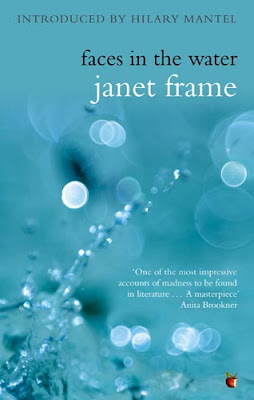 Nice to see this influential book by Janet Frame recognised in the company of Awakenings, One Day in the Life of Ivan Denisovich, Jane Eyre, The Collector etc.

...
Posted by Pamela Gordon No comments: 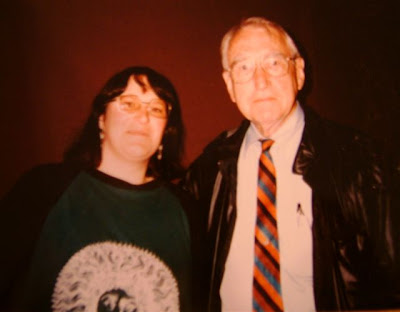 Photo: Pamela Gordon with family friend John Money in Dunedin, March 1993, at a literary conference
Frame studies "paparrazo" Patrick Evans (his own term) has posed a complicated theory for why Janet Frame called her close friend John Money "John Forrest" in her autobiography. I've been told that his explanation went something like "John Money - money belt - belt of trees - forest".

I have my own theory but I don't remember ever suggesting it to Janet. My guess is that "Forrest" comes from the "It's only for a rest" that John reassured Janet with, when he and two other men from the University of Otago's Psychology Department came to her home late one night to march her off to the psychiatric ward at the local hospital. Money and the others feared that if a student who was in an inappropriately close emotional relationship with her tutor, committed suicide, as she had been threatening to, "the Psych Dept's name would be black" (this extraordinarily revealing quote is from John Money's journal at the time, quoted in the Michael King biography, Chapter 4). Frame was handed over that night to the hospital staff already tagged with the label "schizophrenic" (the inexperienced young psych student Money was arrogantly certain of his ability to make this call despite his own lack of medical qualifications) and his 'diagnosis' was apparently never challenged until over ten years later when Frame consulted a reputable hospital in London. As a result of this initial committal at the hands of three academics specialising in psychology, Frame famously found herself trapped in a cycle of institutionalisation.

Another theory for the name "Forrest" emerged at a literary festival in Dunedin in 1993. John Money was on a panel discussing the fact that he was known to be the inspiration for Frame's fictional character Brian in LIVING IN THE MANIOTOTO, as well as of course having earlier been an influential (if somewhat malevolently so) key figure in the young Janet's life story. Well known New Zealand children's author Margaret Mahy was in the audience, and at question time she proposed that perhaps Frame had chosen to replace "Money" with "Forrest" in her autobiography because the real name signified too much crass materialism and swayed the reader off in a false direction if applied to Money. She thought that with Frame's sensitivity to names, that the conflict between the name "Money" and the man, would have been too great. Something more natural was called for. (I think an analogy was drawn to Frame's own change of name from the fixed inflexible FRAME to the fluid river CLUTHA.)

I do go to literary festivals for my own pleasure and edification, but at this particular session I was also functioning as Janet's spy. She wanted to know what people were saying, especially as her writing was one of the main subjects of the session, and I suppose she was interested to hear what John would say. She was ever alert to disloyalty or misrepresentation on the part of her inner circle. She was a very forgiving friend, but preferred to know who she could trust. When I later told her that someone had suggested she changed John's name because "Money" was too unsuitable a name for him, she laughed, and said, that if she'd been choosing a semantically appropriate name for him then "Money" would have been the FIRST name she'd have chosen...
Posted by Pamela Gordon No comments: 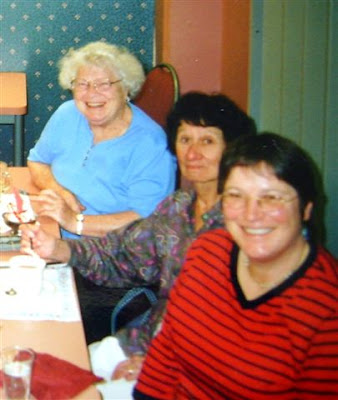 Janet, Jacquie, Pamela
Below the radar of the mythologising misogynistic mafia that has so misrepresented Janet Frame the person in her home country, far from the prying eyes of the people from Porlock who have persisted in patronising the author and pathologising the person, beyond the public profiles and the academic theorising, the fantastic invented personas imagined for her, real life always went on, friends and family and relationships flourished.

Here's a snapshot from early this century, at a meal in South Dunedin. Among the visitors, Janet's close friend Jacquie Baxter, also long considered by the Gordons as an extended family member. There were six or seven other whanau and friends at the table that day. It was not a rare event. There were no hermits at the table, just people who liked to preserve their privacy.
Posted by Pamela Gordon No comments: 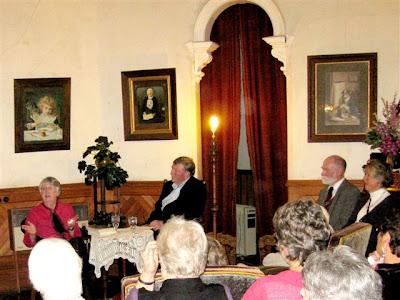 The Friends of Janet Frame House recently hosted a literary high tea at the historic Burnside Homestead near Oamaru.
Two of New Zealand's most distinguished authors, Fiona Kidman and Owen Marshall, entertained the capacity audience by discussing the importance of "A Sense of Place" in writing.
The evening was dedicated to the memory of Janet Frame, and what better to way to celebrate that late great New Zealand author than by hearing from two of the very best contemporary New Zealand writers?
Posted by Pamela Gordon No comments: 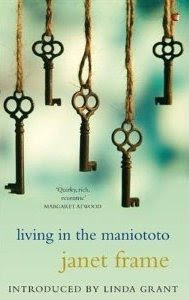 She recently reviewed the latest Janet Frame title to be released in a Virago Modern Classic edition: Living in the Maniototo.

Here is the link:
http://dovegreyreader.typepad.com/dovegreyreader_scribbles/2010/04/living-on-the-maniototo-janet-frame.html
Posted by Pamela Gordon No comments:

The poll results were announced at a celebration of the 21st birthday of the bookshop. See a report at the Booksellers NZ web site.
Posted by Pamela Gordon No comments:

Another notice in the New York Times 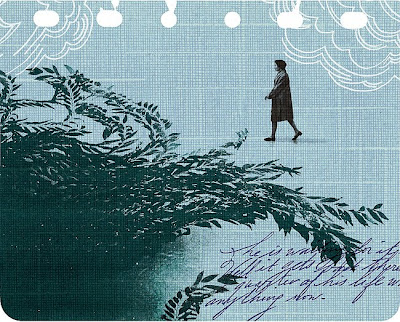 The recently released US paperback edition of Towards Another Summer has received a notice in the New York Times in the Sunday Book Review section of the print edition for Sunday 2 May 2010; link to the online article here.


The US publisher is Counterpoint Press. Check the new edition out on Amazon.com
Posted by Pamela Gordon 2 comments: