FREEFALL:  treasures from the Hocken library

A current exhibition at the Hocken Library in Dunedin features a 1947 fan letter Janet Frame wrote to fellow New Zealand poet James K Baxter. Frame sent the letter from the Occidental Hotel in Christchurch where she was working as a live-in maid. 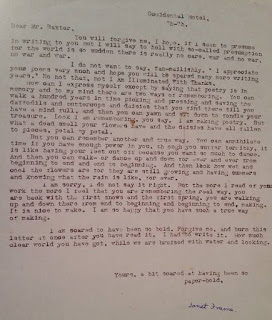 Not a performing monkey


Apparently this was not strictly the first contact between the two. A mutual friend of Frame and Baxter had attempted to manipulate Frame into a surprise meeting with Baxter in Dunedin the previous year. Frame was confronted with Baxter's presence at a private meeting without expecting it, and she consequently ignored him. This kind of ambush meeting never went well with Frame who had a fierce sense of her own agency. She was particularly stubborn when it came to people trying to trick her into a situation without having respect for her free will. Stories about these disastrous attempts to ambush Frame are almost always told in a pathologising way, as though she was incapable of the social occasion, but those of us who knew Janet well would recognize her anger when anyone tried to bully her into something she would rather not do, or do under her own steam. Anyone who tried to trick Janet into meeting someone who had begged to meet her ran the risk of losing her trust if not her friendship. And if somebody did manage to force their way into her presence uninvited she did deliberately give them the silent treatment. She reached out to people under her own terms and was very annoyed if any of her associates tried to show her off or treat her like a performing monkey. Janet's friend Bill Brown learned this lesson for himself many years later (she never changed this strategy.) Bill amusingly used to tell of the time he invited friends over to meet the famous visiting author, without asking or telling Janet, and she stayed stubbornly silent for the whole ambush visit, later fuming about the imposition. "I never did that again!" he used to say with a laugh.


Also on display in the exhibition 'Freefall' is the original typescript of Frame's poetry volume THE POCKET MIRROR (1967). Another myth-buster, this original manuscript is skillfully typed, tidy, with all the poems numbered in sequence. There is a story going around that these poems were roughly thrown together in no particular order but the Hocken manuscript shows that, as was her custom, Frame had put together a coherent and well-presented document.

By 1967, 20 years after she first wrote to him, Frame and Baxter were now close friends and The Pocket Mirror contains a verse letter to Baxter called 'The Reply', reminiscing about a winter outing Frame had been on with the Baxter family.

Many other wonderful items are on display in this exhibition, which closes on the 1st of July.
Posted by Pamela Gordon No comments: