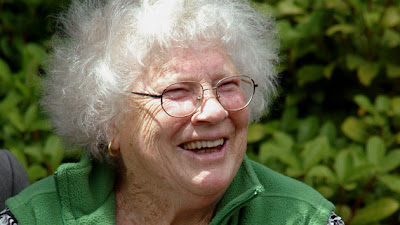 Janet Frame, New Zealand icon and one of the Top 100 History-Makers
Posted by Pamela Gordon No comments:

A guy at the Country Music Hall of Fame gift shop was all "You're from New Zealand? I LOVE Janet Frame." In your face, rugby and hobbits.
— scheming kitten (@HungryandFrozen) October 13, 2012

A Kiwi tourist in the USA is startled - and thrilled - to discover that Janet Frame is quite well known overseas after all. 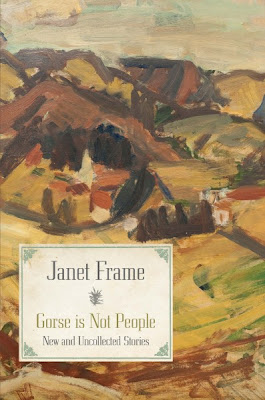 
Andrew Tait, who starts by admitting that he has "never read anything by Janet Frame before."
"While this means I cannot draw comparisons, the advantage is that I can provide a recommendation for other newbies. And these stories certainly deserve recommendation."
As with many New Zealanders who have been influenced by an unfortunately widespread negative indoctrination concerning their tallest literary poppy, Tait had been fearful that the Janet Frame stories "would be too literary, or too experimental and that I would struggle to keep track of what was going on."
But, as with almost any general reader who actually opens a Janet Frame book to see for themselves instead of listening to the academic and industry gatekeepers who have insisted that Frame is too "difficult", Tait discovered that "while there are many layers and levels to the stories, they all had a clear narrative that was enjoyable for itself."
"Frame is a masterful short story writer. Her stories are short, crisp and distinct. The narrative draws you on from page to page."
"for Frame, and perhaps for all of us if we are honest, life is a hard thing... Even the simple tale of a retirement gift contains a bitterness and savagery I had not expected.
This is, I suppose, what makes Frame a cut above ordinary writers."
Posted by Pamela Gordon No comments:

Another new paperback edition in Germany 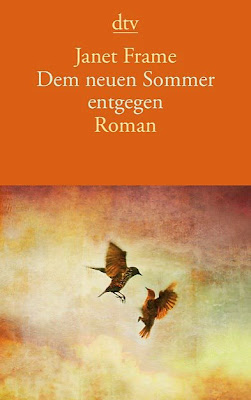 Dem neuen Sommer entgegen
Janet Frame
(Towards Another Summer)
3rd German Edition
pocketbook
Deutscher Taschenbuch Verlag
October 2012
A new German edition of Janet Frame's Dem neuen Sommer entgegen (Towards Another Summer) has been released this week. Publisher CH Beck has sublicensed the rights for a pocketbook edition to publisher DTV.
This title received enthusiastic reviews on first publication of the hardback and then the paperback edition. I have collected some of the links here, here and here.
aus dem Englischen von Karen Nölle
288 Seiten
ISBN 978-3-423-14156-7
Oktober 2012 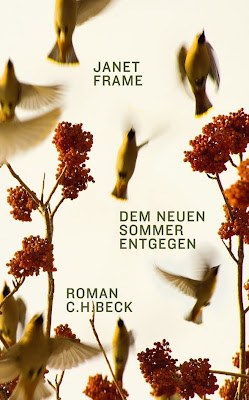 Representations of Frame at Frankurt

"He is the only enemy I know that I have" said Janet Frame of fellow New Zealand author CK Stead, in 1970, in a letter to her American friend Bill Brown.

Within the next ten years Frame was to become aware of one other person who might qualify as an 'enemy': this time, it was also a middle class white New Zealand male university teacher: the academic Patrick Evans, who has notoriously busied himself for decades attempting to entrap Frame within her fiction, which he has in any case declared unreadable except for 'experts' like himself who make a career of it.

Both these two elderly white male New Zealand English literature professors have been very influential in their teaching and critical careers, in fostering within NZ anyway, a patronising attitude towards Frame and her work (neither seems able to separate the two).

The first elderly white male Professor, CK Stead, was on a panel in Frankfurt yesterday, at the New Zealand Pavilion, discussing Janet Frame among other "Iconic New Zealand Writers".

Stead's companions on the panel were two fellow Kiwi authors, both women: Emily Perkins (in the news this year for an embarrassing prediction that her latest novel might be Booker-worthy) and Kate de Goldi (a children's writer), so you might think there was a fair balance, concerning Frame anyway.

But, Perkins and de Goldi are both (for their own reasons no doubt) fervent promoters of the Patrick Evans agenda. I have heard them both gush about the fan fiction novel he wrote about Frame (using her real name) a couple of years ago. (I use the word 'gush' because for me that conveys their obvious ignorance of the back story to the novel; they seem to truly believe it's a 'loving' portrait of 'Janet' rather than the stitch-up job it really is.)

Stead also wrote a novel fictionalising Frame - but he at least employed a pseudonym for his demeaning caricature of her, and had the honesty to admit his sniggering portrait was an act of revenge for an offence he believed Frame herself to have committed against him. Stead's vendetta novel is notable for its dark energy; it's probably his best. He has a reputation for his amusingly iconoclastic literary criticisms. "I don't do reverence" is his mantra, and he justifies his excoriations by claiming to an 'objectivity' that apparently evades lesser minds than his. His antics are all quite fun unless of course one becomes his target, then one feels the emotional force behind his "objectivity".

The Evans novel by contrast is "turgid" (a word the late Christine Cole-Catley employed in an email to me, describing her distaste for the writing style and the content). He changes basic facts of Frame's life, removes her friends and family, portrays her as dishonest, and distorts or obliterates significant events, while still preserving her real name as if it were a "historical" novel. Evans and his flunkies have made extravagant claims that his novel offers 'insights' into Frame that the mere truth is not capable of presenting. In my opinion all that we learn from his novel is about Evans's own failure as a biographer and his flaws as a literary critic: he has had to invent the biographical justifications for his flaccid theories about Frame, because the facts of her life and work did not support his fantasies.

Why two modern successful women such as Perkins and de Goldi - who have both benefited from the pioneering courage of predecessors such as Frame - should back up such an act of aggression and appropriation against Frame's autonomy and her moral right not to be misrepresented within ten years of her death, I will never comprehend.

I just find it sad that these three were the people chosen to talk about Frame for an international audience. Where's the objectivity?

CK Stead has publicly claimed that "Janet wouldn't mind". I can tell you, that despite her dignified silence, Janet did mind. And she would mind.

A snippet from Janet Frame's 1970 letter describing CK Stead's enmity and the reason for it.
Posted by Pamela Gordon No comments: 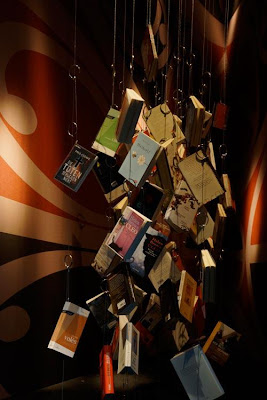 TV3 news report on the opening
Posted by Pamela Gordon No comments: