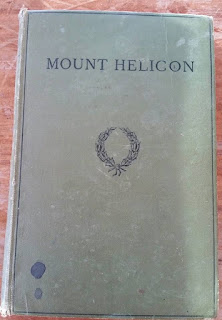 An excerpt from Janet Frame's first volume of autobiography To the Is-Land: 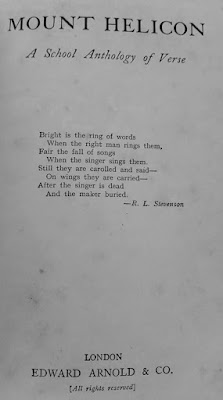 I began to explore the poetry book, and to my amazement I discovered that many of the poets knew about Myrtle’s death and how strange it was without her. After the funeral was over the visitors had gone and my new lessons arrived, the everydayness of life had returned; yet in each day there was blankness, a Myrtle-missing part, and it was upon this blankness that the poets in Mount Helicon were writing the story of my feelings.

I could scarcely believe their depth of understanding. Mother, who revered all poets, was right, as usual, and her habit of murmuring from time to time ‘Only the poets know, only the poets know’ was now explicable to me; I understood also why she wrote so many of her verses about poets: there was the one I had recited at school.

He was a poet, he loved the wild thunder
as it crashed in the Universe. Now he sleeps under,
under the grass he loved. Stilled now his hand
only a poet’s heart could understand.
He heard the whispering of the pine trees.
Always within his heart, sweet melodies.
Glories of morning awoke in his heart.
He was himself of nature apart.
Softly he slumbers. Does someone care?
Nature showers o’er him leaves from her hair.

Mother sought the poets not necessarily for their poems but for the romantic idea of them, as if they might be a more tangible Second Coming, and when she began her familiar praise of them, Dad became jealous, as he became jealous of her references to Christ, and his jealousy always resulted in scorn. 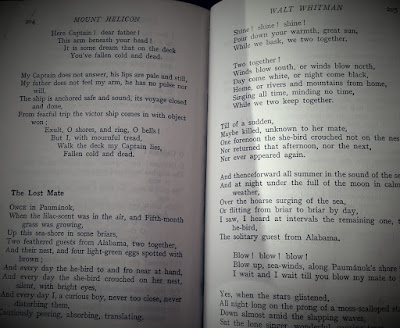 A long poem in Mount Helicon, ‘The Lost Mate’ from Sea Drift by Walt Whitman, told everything I was feeling – the two mocking birds, the disappearance of one, the long search by its mate, with all the false alarms and pondered might-have-beens, the anger and regret and the desperate reasoning that enlisted the help of magic, ending in the failure to find what was lost and the letting go of all hope of finding it. I understood all the deceptions of thought and feeling which tried to persuade the mourning bird that there’d been no loss, that its mate would soon be home, had simply ‘gone away’ for the day or had been delayed and would be home some time, ‘you’ll see’. I read the poem to my youngest sister, Chicks, who also understood it. She and I read the poem again and again. I was amazed that my book should contain other such poems about Myrtle – ‘Annabel Lee’ – ‘It was many and many a year ago / In a kingdom by the sea . . .’ A kingdom by the sea! Oamaru, without a doubt. Oamaru with its wild sea beyond the breakwater and the friendly bay safe within, with the sound of the sea in our ears day and night.

There was yet another poem, ‘Evelyn Hope’:

Beautiful Evelyn Hope is dead!
Sit and watch by her side an hour.
That is her bookshelf, this her bed;
She plucked that piece of geranium-flower,
Beginning to die too, in the glass . . .
Sixteen years old when she died!

What marvellous knowledge of the poets who could see through my own life, who could be appearing to write poems of people in Oamaru, which everyone knew was halfway between the equator and the South Pole, forty-five degrees south, and which yet was not nearly so well known as Auckland or Wellington or Sydney or London or Paris, any cities in the Northern Hemisphere where many of the poets (who were dead) had lived!

(From 'Once Paumanok', Chapter 20 in To the Is-Land by Janet Frame)

CK Stead Is The Only Solipsist Here 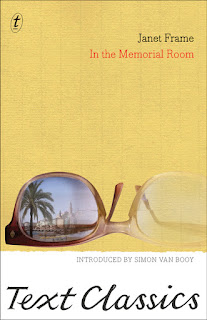 "Stead is the only solipsist here."

Denis Harold has reviewed CK Stead's new collection of 'reviews, replies and reminiscences' in Landfall Review Online (1st July 2016). In Stead's new tome there is an excoriating attack by Stead not just on Janet Frame's last published novel In the Memorial Room, but he also uses the soapbox to cast aspersions on Frame's personality as well as on the integrity of the charitable trust she founded to care for her work after her death.

Now, the vicious undermining of the work and character and heritage of a woman Stead once affected to call 'friend' is no surprise to anyone. He is known to be that kind of backstabber. The smiling assassin type that is apparently so beloved by some of the New Zealand public for some sad reason.

As usual, Stead has had a go at a lot of other targets too, including Ted Hughes and Eleanor Catton. And yet the publicity around his book calls it 'less controversial' than his previous offerings. Bizarrely, this fraudulent claim seems to have been swallowed by most reviewers. On the whole, Stead seems to be taken at his own estimation as he wallows in his own small pond.

In his review, Denis Harold picks out a couple of the false claims Stead makes about Janet Frame. First, Stead says of In the Memorial Room:

"This is a looking-in-darkly rather than a looking-out-bravely novel … which makes surprisingly little, nothing in fact, of the visual lift offered by its Côte d’Azur setting."

"nothing, in fact" !!
﻿
Apart from Stead's missing the fact that the protagonist of the novel is actually going blind during the course of the novel so that his not spouting great swathes of purple prose about the delightful scenic environs might in fact be appropriate, it is not true that Frame misses the surroundings. They are there on every page, described as artfully and thoughtfully as ever. The bitter old reviewer is the only one who is blind to the charms of the prose. His aim in calling Frame a 'solipsist' is clear: to discourage anyone from even approaching a Janet Frame novel to find out for themselves what is really there. At least one reviewer has shown himself to take Stead at his word and assume Stead's criticisms of Frame's novel have been 'justified' despite not having read it himself!

And again the question of Frame's Buddhist leanings arises. These leanings are on the record and well authenticated. But it all appears to enrage Stead. I can only laugh at that. He fictionalised her many years ago as a Buddhist and now he regrets that it makes her seem too sane - so he tries to deny it! And claim himself as the Buddhist! If he really did not know of Frame's interest in Buddhism then it shows that he wasn't much of the friend he used to like to claim he was. Or perhaps he has just forgotten.

A brief excerpt from Janet Frame's novel In the Memorial Room

"the rich-looking famous and the famous-looking rich"

Excerpt from In the Memorial Room by Janet Frame: 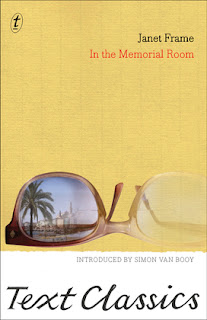 I had been in Menton for two months. It was now March. The winter in its final convulsive display of life had arrested all transport to and from the mountains and through the country. Deep drifts of snow, gales, high seas, floods, once again became the chief actors in the drama outlined, criticised and photographed by the newspapers; once again tenants were forced to leave their immobiliers, threatened by yet another déroulement. Snow, it was said, had never fallen so low on the slopes of the mountains, so near the sea, nor had so many pleasure-boats been lost on the Mediterranean, nor had the Mediterranean been so treacherous in its impulsive apparently changeling storms of no visible origin.

Nor had the citrus crop been so abundant, and faithful in taste and colour. Behind special screens in the city’s garden square, preparations were being made for the annual lemon festival, the artistic display of lemons, oranges and all other fruits of the region; everyone waited anxiously for the counterfeit winter to admit its nature; on the slopes and in the valleys of the mountain, the arrière-pays, the scent of the flowering mimosa hung in the air; the grey lavender buds began to open even from as low as the rock where they grew, to prepare the change in the colour of the sky that in three, four, five weeks would be challenged, rivalled, enhanced in its colour by the blossoming trees and flowers.

Everywhere, every year there is weather described as unusual, not by the visitors but by those who know best, the inhabitants. The old blind man, one hundred and fifteen years old, who lived away up in the mountain village of Sainte-Agnès and spent his day, if the weather were fine, on the stone seat in the sun outside his small house, watching the people, mostly tourists, come and go through the narrow cobbled streets, was reported as saying he had never known the snow so deep. He was not afraid to go out in it, he said; indeed, on the day he was interviewed by the newspaper, on his birthday, he was standing out in the snow, with an old straw hat pulled tightly over his blind eyes, wearing a bright blue nylon raincoat (buttoned), though he nevertheless kept raising his face to the light. The winter had been terrible, he said, authoritatively from his one hundred and fifteen years. And he knew. He might be blind – the bandits had come from the mountains, attacked him and blinded him, his family had descended upon him and carried off all his belles choses – but he knew how to assess the seasons from one year to another. His authority gave the city a sudden sense of pride in the unusual weather. The mayor, on a visit to Paris, remarked about it to a newspaper reporter and his remark appeared in both a morning and an evening Paris newspaper and was reflected back to the local Nice-Matin, like the effortless journey of a satellite swinging – as far as we on earth know – soundlessly through space.

Then, suddenly, for the opening of the lemon festival, the sun shone, the snow melted, and people flocked to the city – very old mountain-people, their mountain gait strangely unbalancing them on the wide, level promenade; guests from the many villas, pensions and hotels; visitors in fast cars from Italy and north and west of Monte Carlo, the rich-looking famous and the famous-looking rich, the unsuntanned and the suntanned; and the crooks, les escrocs, the pick-pockets, malfaiteurs, cambrioleurs.
Posted by Pamela Gordon No comments: