Song of the Years

It's 43 years ago today since the untimely death from a heart attack of poet James K Baxter (known to his family and friends as Jim and also Hemi).

Jim Baxter was a close friend of Janet Frame's. He dedicated his book of essays The Man on the Horse (University of Otago Press, 1967) to her, using the pseudonym she lived under, 'Janet Clutha'. 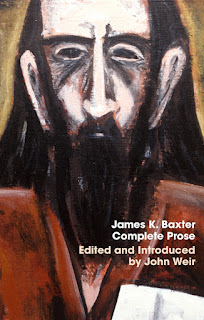 In late August this year I attended the launch of James K. Baxter: Complete Prose (edited by John Weir) at the Kelburn Campus Library, Victoria University of Wellington. I was there with my brother and sister-in-law to support my friend John Baxter, Jim Baxter's son, and to represent the Frame and Gordon families (both of which have cherished a strong and long-held relationship with the Baxter whanau) at such an important literary and cultural event.

The launch was preceded by a seminar on aspects of Baxter’s writing life. Among the speakers were:
Dr John Weir on his experiences editing the prose anthology,
Colin Durning, close friend and confidant of Baxter,
Eli Kent, playwright and grand-nephew of Baxter, reading an essay by Baxter,
Dr Paul Millar, Baxter scholar.

A karakia was followed by a deeply moving performance from Dave Dobbyn singing Baxter’s ‘Song of the Years’. It was a beautiful and fitting tribute.