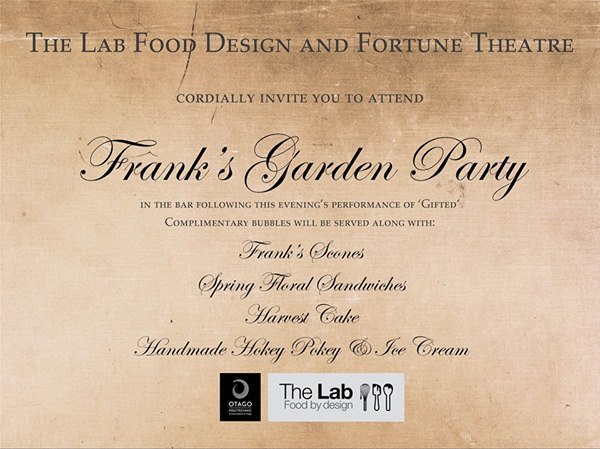 The menu for a supper held after one of the 2013 performances of the Patrick Evans play Gifted at the Fortune Theatre in Dunedin
reveals the cringe-making level of the 'wit' associated with this campaign to cement in a demeaning portrait of Frame as otherworldly and without rationality.
Because powerful brilliant successful women are easier for blokes to handle if you pathologise them and portray them as weak and foolish.
Pansy sandwiches (wink wink!) were accompanied by fruit and nut cake (giggle giggle).
Because Frank was a fruit and Janet was a nut, get it? get it?
And Harry and Frank were pansies! Nudge nudge! Say no more!
Ooooh naughty.... haha chuckle.
Homophobia and misogyny and mental illness played for laughs by a sniggering middle class cabal.
LINK: 'Play Suffers from 'significant ethical problem'
(Otago Daily Times)

While the invite said 'Spring Floral Sandwiches' and 'Harvest Cake', the fact that these were essentially 'pansy sandwiches' and 'fruit and nut cake' was made crystal clear on the night, as could be gathered by social media reports like this one
[Image: screen shot from Fortune Theatre Facebook page]
Posted by Pamela Gordon at 12:50 PM