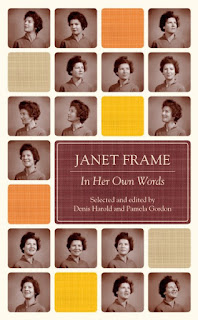 "To achieve the fullest possible sense of liberating Frame from an obscuring fog of speculative gossip, hack journalism, lackadaisical research and lazy thinking in the interview section, the editors have extracted her direct speech from each interviewer's contributions. At first this reductiveness can be slightly disorienting; yet the knack of focusing our own reading isn't hard to apply, and it certainly highlights the editors' determination to reveal distorting agendas of all kinds."

From Emma Neale's review of Janet Frame In Her Own Words in Landfall 223 May 2012.

It is to Neale's credit that she was able to fight the long-instilled habit within New Zealand of seeking an external interpretation for anything Janet Frame wrote or said. For some reason there is a tremendous resistance in Frame's native land to taking Frame at face value.

It's interesting that Neale was not the only reviewer of the non-fiction to experience and mention this 'disorientation'. Why is it so disorienting to allow Janet Frame to speak for herself without someone next to her redefining and often enough contradicting (as so often happened in her interviews) what Frame has just said?

It is not considered odd to read collections of the selected quotes of other prominent people. Why isn't Janet Frame allowed to speak without an external interpretative 'frame'?

The disjuncture between the facts of Frame's life and the fiercely held and argued myths about her, is growing wider. It's a habit that New Zealand has got into.

No wonder Janet Frame was frightened of coming back to New Zealand. She was always in danger of being seized, misdiagnosed again, and lobotomized. Small-minded malicious gossips apparently lurk under every rock, even in the literary world here.

May history condemn their envy and their wilful ignorance.

"I was a certified lunatic in New Zealand. Go back? I was advised to sell hats for my salvation."


(Quote from Towards Another Summer by Janet Frame)

"I have been in great personal danger in New Zealand. I have been in danger of being destroyed by people who decided it was their right to try to make me what they wanted me to become – and this without any detailed scientific or human investigation of me. Do you wonder when I say I’m not completely at home in New Zealand. There has been a financial compensation for the years of suffering. I have a small fixed annuity which means that I do not starve – not yet. The New Zealand Authors Library Fund has been very welcome. All the same, I don’t feel at home in New Zealand – although it isn’t necessary to feel at home to do one’s work. To me, the sun, the beach, the holiday pursuits are more pleasant in dream than in reality. I burn in the sun. I wilt in the heat. The blaze of colour and light are not the realities I’m seeking."

(Janet Frame, from 'Notes for Interviews', from Janet Frame In Her Own Words, p119)