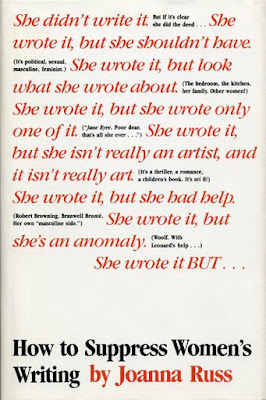 How to Suppress Women's Writing
by Joanna Russ
University of Texas Press
1983
Janet Frame is one of the women writers who have been subject to several of the common methods that are used to ignore, condemn or belittle the work of female authors:

1. Prohibitions
Prevent women from access to the basic tools for writing.
2. Bad Faith
Unconsciously create social systems that ignore or devalue women's writing.
3. Denial of Agency
Deny that a woman wrote it.
4. Pollution of Agency
Show that their art is immodest, not actually art, or shouldn't have been written about.
5. The Double Standard of Content
Claim that one set of experiences is considered more valuable than another.
6. False Categorizing
Incorrectly categorise women artists as the wives, mothers, daughters, sisters, or lovers of male artists.
7. Isolation
Create a myth of isolated achievement that claims that only one work or short series of poems is considered great.
8. Anomalousness
Assert that the woman in question is eccentric or atypical.
9. Lack of Models
Reinforce a male author dominance in literary canons in order to cut off women writers' inspiration and role models.
10. Responses
Force women to deny their female identity in order to be taken seriously.
11. Aesthetics
Popularise aesthetic works that contain demeaning roles and characterisations of women.