A violent act of colonisation

The play GIFTED by Patrick Evans currently playing at Circa Theatre, Wellington, is a violent act of colonisation of Janet Frame's life and work.

GIFTED is no 'love letter' from an admirer, as the publicity from its 2013 season proclaimed. It is a deliberate attempt to muddy the waters of myth and malicious gossip that already swirled about Frame's reputation. GIFTED exaggerates the popular caricatures of 'Janet' and makes her the butt of the same kind of sniggering jokes that the misogynist bully boys of New Zealand literature have always guffawed at behind their hands in smoky alcohol-sodden back rooms.

Nobody learns anything about the real Janet Frame from GIFTED: it distorts the historical facts, omits characters and invents others all in order to present a fraudulent impression.

Worst of all is the disgraceful misrepresentation of Frame's intellect and wit and genius. Unworthy thoughts are attributed to her, puerile adolescent puns are put into her mouth as if they even remotely approach her own facility with language.

The first season of GIFTED was characterised by a shockingly dishonest and hostile publicity campaign in which the valid criticisms of Frame's family and estate were met with ad hominem attacks, slander and public vilification from the producer of the play Conrad Newport and others invested in and associated with the play and the Christchurch Festival where it premiered.

The scam of the 'love letter' has been dialled back somewhat for the promotion of the Wellington season, as has the fraudulent fake Janet Frame quote that appeared on posters. Unfortunately, it appears that the Wellington audiences are still being deceived about the motives and the content of the play.

However I was absolutely delighted to see the first review from the Circa opening night has been written with integrity and intelligence, and actually makes the clear distinctions that the Frame family and estate have been asking for. This is fiction. It is NOT 'literary history'.

That is all we asked for - an admission that the play is an invention and not based on historical fact, so that audiences would understand that they are NOT receiving the benefit of a wise professor who "has studied Frame for decades", they are witnessing a garbled and confused fantasy about Frame that the elderly academic himself does not even seem to recognise, judging by his interviews, is not true.

Evans has been content in his long parasitic career to just make things up about Frame, relying on a clearly appalling memory and a naïve belief that he could make biographical speculations based only on the 'evidence' of her fiction. This was one of the reasons she despised him.

Unlike Janet Frame who was able to make clear distinctions, Evans doesn't know 'this world' from 'that world'. He has become trapped in his own fantasy.

'A pot calls the kettle bleak'

'A dog returns to his vomit'

Gifted by Patrick Evans: A Review 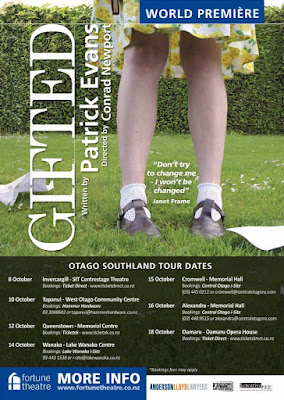 Disturbingly sexually suggestive poster for the 2013 tour of GIFTED to the provinces and backwater festivals.
The image shows us looking up the dress of some girl - but Janet Frame was in her early 30s - and already a well-known highly acclaimed prizewinning author of her first book THE LAGOON - when she met Frank Sargeson.
Note the fraudulent 'Janet Frame' quote. In fact one of Frame's mottos in real life was the line  'You must change your life' from a Rilke poem.
Posted by Pamela Gordon