Do Mention The War 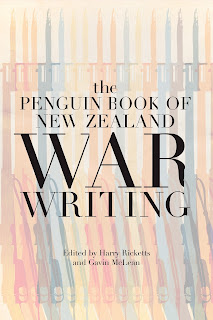 The Penguin Book of New Zealand War Writing
2015
Edited by Harry Ricketts & Gavin McLean
Hot off the press and well-timed to coincide with the proliferation of commemorations of the First World War Centenary, this is a solid - but not too solid - volume, with an excellent coverage of relevant material.
As the daughter of a second world war conscientious objector, and the grand niece of a first world war pacifist, I was pleased to see that Kiwi pacifist and protest writing is also included under the banner 'War Writing'. We hear about Parihaka, and we hear from the conchie classics written by Archibald Baxter, Ormond Burton and Walter Lawry. Bravo!
There is a poem in there by Janet Frame: 'Instructions for Bombing With Napalm',  a satirical poem that consists of rearranging the letters of the words 'napalm', 'naphthalene' and 'coconut oil' into anagrams and near-anagrams, stringing the whole together impressionistically but unmistakably as a protest at the atrocities of the Vietnam era military strategies.
Conventionally all reviews or notices concerning anthologies must discuss absences.
For me the most unfortunate albeit understandable omission here is of any excerpt from the Charles Brasch wartime diaries, published in 2013, perhaps too late to be included in the Ricketts & McLean table of contents. 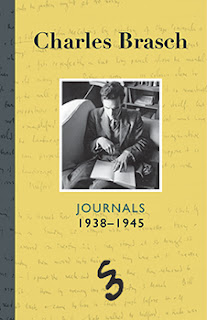 One would hope some passage[s] from the Brasch journals, most notably about his experiences of working at Bletchley Park, would find their way into any future edition of an anthology of New Zealand War Writing.

Anzac Poppies and Tall Poppies
Speaking as Janet Frame's executor, I was also disappointed that the editors have clearly not discovered her small masterpiece 'Between My Father and the King', a posthumously published short short story that has already been hailed internationally as a classic of literary commentary on the fate of the returned colonial soldier.
You can read 'Between My Father and the King' by Janet Frame for yourself here in The Manchester Review. (770 words)
Some pettiness can be identified in the 'bio' of Janet Frame that appears with her poem, where one reads that Frame was "an accomplished, if patchy, poet." Strange words to say about an author whose two substantial books of poetry both won New Zealand's supreme literary award for their year, and whose two poetry books have together sold tens of thousands of copies.
Not to mention all the poetry that appears in Frame's 13 novels, enough for a career's worth of slim volumes, and with the verse at a higher strike rate of fine quality too, than in the oeuvre of many a plodding local poet who doesn't rate Janet Frame as a 'poet' at all despite her poetry having gained a world-wide reputation, prizes, strong sales, presence in international anthologies and educational curricula, and, this year, volumes translated into Spanish and Swedish.
'Patchy' is a cheap dig to make, and there is hardly a poet in the world who wouldn't qualify for the term, should one be small-minded enough to want to put someone's work down without any actual evidence for the snipe. In any case surely you must judge a poet by their best work, not by their lesser pieces?

'Patchy' - really? What does it mean? It's a word that means nothing except the connotation it carries, and the intention to cut someone (a tall poppy perhaps) down to size.
The poem by Janet Frame that is included here is clever, and chilling, but it is not one of her greatest pieces by any means. It makes a fine protest poem,  but it is a squib, and not typical of her poetry at all. To choose a minor poem and then belittle the poet as a poet is in my opinion mean-spirited but not surprising given the current posthumous backlash against Frame in her native land. The editors were happy to include one of our greatest writers and mention her in their publicity, but they couldn't resist this trolling little shot across the parapets.
Posted by Pamela Gordon