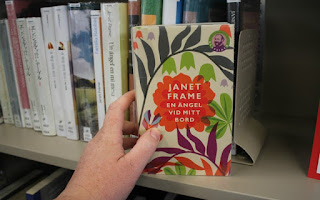 Last week our friends at the Oamaru Library celebrated the 40th anniversary of their current library building. I was in Oamaru for the day and when I dropped in to the library to gift another couple of recent foreign editions to complement their extensive Janet Frame Collection, I was highly entertained to see staff wearing or assembling their 1970s fashion outfits ahead of their 'birthday' party. (Oamaru has the Victorian era as one of its tourism themes and it is common to see the locals wearing Victorian garb, so bellbottoms and ponchos and peace signs were quite a novelty!)

The Waitaki District Libraries have a new web portal in the Culture Waitaki website, and there is now a very useful link straight to the Janet Frame Collection:

Two recent publications will be added to the collection: a Polish edition of Faces in the Water and a Swedish volume of Selected Poems.

Find more news from the Waitaki District Libraries on their Facebook Page.
Posted by Pamela Gordon