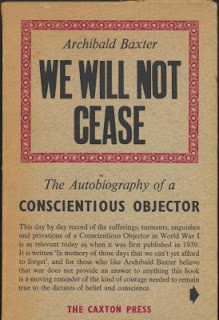 On September 21st last year I attended the launch in Dunedin of the Archibald Baxter Memorial Trust. Archibald Baxter is New Zealand's best known conscientious objector and author of We Will Not Cease which is a classic account of his experiences as a military defaulter in the First World War, during which he was sent to Europe and subjected to brutal field punishment.

In just over a year the Archibald Baxter Trust has achieved splendid progress in the planning for a memorial to Archie Baxter to be erected in Dunedin's Otago Museum reserve. Visit this link to see the three finalists in the sculpture competition:

Archibald Baxter and his wife Millicent Baxter were the parents of Janet Frame's friend the famous New Zealand poet James K Baxter. The Baxters (senior) lived in Brighton near Dunedin and were part of the social group Janet mixed with when she lived in Dunedin during the 1960s.

Janet Frame had other connections with the Baxter family beside her friendship with Jim Baxter and his wife Jacquie (JC Sturm). Janet's childhood friend and neighbour Marguerite from Oamaru had married Jim Baxter's cousin Jack Baxter after the war. Jack had been a conscientious objector during the war and was imprisoned along with Frame's brother-in-law (my father) Wilson Gordon. Jack Baxter was best man at my parents' wedding. Jack and Marguerite lived in Brighton and Janet used to go out there to visit them when she lived in Dunedin. So the Frames, the Baxters and the Gordons have been well connected for many years.

Not long before Dad's death in 2007 he discovered that somebody in the extended Gordon family had married a Baxter. When I told Jacquie, who was my friend and mentor (and who had been Jim's wife and one of Janet's closest friends) she said: "I always knew we were whānau!"