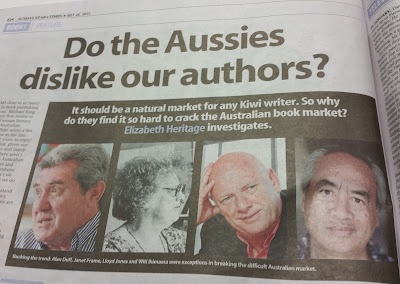 The print version of this article in the Sunday Star Times (July 2015) is headed:

'Do the Aussies dislike our authors?'

The digital version of the same story archived online has the rather more confrontational headline:

The online version is accompanied by a photograph of Janet Frame with the caption: 'Janet Frame found success across the Tasman.'


She certainly did - as have quite a few other New Zealand authors. 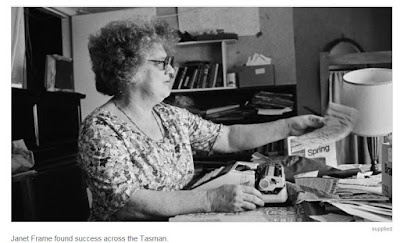 The article opens with an anecdote attributed to Michael King and based on a true story about Janet Frame and Patrick White, and it is surprisingly only a little garbled by the retelling:

"Michael King used to tell a story that seems to typify the trans-Tasman literary relationship: Patrick White wrote a fan letter to Janet Frame in the late 1950s. It took her 22 years to reply!"

The 22 years is correct. But Patrick White wrote to Janet Frame in 1963. Among other things in that fan letter, he said:

"You have had some very silly reviews, but don't let that worry you. You are the most exciting writer I have come across since Yevtushenko."

22 years later - in 1985 - Janet Frame and I were visiting Sydney together. She very much wanted to meet Patrick White and even found out where he lived (they shared the same literary agency at that time) and we went there together and stood outside his house hoping to catch a glimpse. If he had emerged I am sure she would have hailed him, but she couldn't bring herself to be so obtrusive as to knock unannounced, as she had heard he didn't like to be disturbed. She also had his phone number, and on our last morning in Sydney, she rang.

Manoly answered. Patrick had been very ill that week, and couldn't come to the phone right now. Janet explained that there was no time to see him now anyway, that she was flying home to New Zealand that afternoon.

"I just rang to thank him for his letter," she said.
She wrote to him instead:
"When your letter came twenty-two years ago I was so much overwhelmed that I couldn’t think how to answer it. It has now become part of my life (private) as ‘the letter’ & has perhaps assumed a literary life of its own. As the years passed I found it harder to answer. I’m using the left-over courage needed on a jet ﬂight to Sydney, to greet you, to say thank you for your encouragement and for your wonderful writing."
~ Janet Frame to Patrick White (22 November 1985)

This eyewitness report of mine conflicts with the one that appears in David Marr's biography of Patrick White. When I told my version to Michael King while he was researching the Frame biography, he said --No it can't have been 1985. According to David Marr it was 1986 and Janet offered to visit and Patrick refused to see her because he did not want his lofty illusions shattered by the mundane reality (or some such).

Michael initially refused to accept my insistence that I did recall the year correctly. David Marr was his authority.
Thinking back, this incident should have prepared me better for the dismissive attitude with which I have been treated after my aunt's death by historians and academics. I have even been asked patronisingly whenever I point out that Frame's death date has been rendered incorrectly (as it regularly has been, for instance in CK Stead's Memoir and in Patrick Evans's Bio for Te Ara, on the Creative NZ Frankfurt website, and in a Dunedin Literary Walks booklet, among others), if I am sure that I know the date of my aunt's death. (I was at her bedside comforting her during her last hours, so yes, I know the day and year.)
Some people are so sure of their facts and their memory that they don't feel the need to check. And once a 'fact' has been published by a member of the Establishment, "it must be true".
I was able to produce evidence for the Sydney trip, however. I went to my wardrobe, dragged out an old suitcase and produced the itinerary and boarding passes for the November 1985 journey that Janet and I had made, including a clipping from a Sydney newspaper that printed an interview that Janet had done while she was there. Michael reluctantly had to accept that David Marr had unusually made a minor error. Patrick White must have misremembered the year and had even varnished the new anecdote himself.