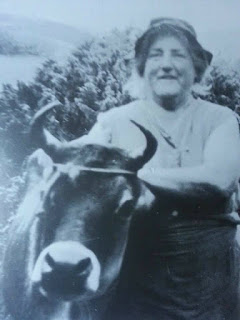 Grandma Lottie Clarice Frame née Godfrey was born on the 29th of February 1892. She grew up in Picton and as a young girl she worked as a housemaid in Katherine Mansfield's grandmother's house. Katherine - also just a girl - came to stay for the holidays and Lottie met her, forming a fond impression. I like to think KM got the name 'Lottie' that she uses in her fiction from meeting Grandma, and maybe she also drew on the real Lottie as a character for a walk-on part in some of her portrayals of the servant class.

Grandma died on this day in 1955, on Friday the 2nd of December. Janet was living in the hut at Frank Sargeson's place and made the mistake of crying and being generally upset on hearing of her mother's death. This was of course pathologised by the patronising men around her. If you have been given a psychiatric label, however wrong the diagnosis is, then nothing you ever do is interpreted as normal, even though grief is normal.

Janet often remarked on this dilemma. Everything she did was open to being interpeted as 'mad' or 'odd' or 'weird' by people who approached her with this expectation. People who could behave in a similar way and would themselves not welcome being called 'disturbed' for it.

To this day Janet's former friend CK Stead, the very epitome of an arch frenemy, will tell you Janet was 'forever' crying in those days.

When he doesn't suddenly remember how witty and quick and what fun she was.

It is easy to trace the inconsistencies in Karl Stead's pronouncements about Janet Frame over the years. He has contradicted himself so much, depending on whether his present aim is to belittle her (presumably he is envious of her success having vastly eclipsed his modest reputation) or to boast about having once been close to her.

"Today is the day mother died..." Janet and Mum used to say every year on the 2nd of December and so even though I never met my grandmother, I still can't help observing her anniversary. Lottie's influence was strong in my life both through the combined oral histories passed down by my mother and my aunt and of course through the written word - Janet's writings and Lottie's poems.

Janet wrote in her autobiography about the day Lottie died and how jealous and angry she was that her sister June had heard the bad news first:

"I was jealous of my sister’s first knowledge of the death, almost as if it were a treasured gift chosen to be given to her, then passed on, used and soiled, second-hand, to me."

Janet was at that time living and working at Frank Sargeson's hut during the week and then staying with June and her young family over the weekends. That one weekend, just after her mother died on the Friday, was one of the rare occasions when Janet chose to stay at Frank's place for the weekend and not go to June's place. She was grieving and she was mad at her sister and the rest of the family for having sent her the news of her mother's death second-hand, and she didn't want to go to their place. It was a rare falling-out between my mother and Janet, and it was brief.

You do cry when your mother dies, and families often go through turmoil and there are recriminations and old rivalries surface.

Janet had overheard Frank and his acolytes sniggering about the 'mad girl' in his garden so her choice of the word 'mad' for 'angry' was a typical one for her, rhetorically and linguistically. Many of the things Janet said were well over the heads of slow-thinking people or dullards and they often mistook her meaning. I saw that many times. She wasn't crazy but she could be mean, and she did play with people that way sometimes. She just couldn't help saying something that had several valid meanings simultaneously, and most of us only grasped one or two levels. She relished Frank Sargeson's company because he at least could get the literary allusions and they enjoyed a marvellous banter. Janet was a quick thinker and had a scintillating wit and Sargeson and Stead are both on the record testifying to that fact.

It's actually hard for a genius like Janet Frame to find soulmates and compatible people that she could even converse with in a satisfying way, without them thinking she was odd, and New Zealand was a small pool for someone like Janet. Katherine Mansfield and Frances Hodgkins both fled and never returned to New Zealand for similar reasons I guess. Janet knew she was misunderstood in her own country but her love for it kept drawing her back. She also had an extra compassion and empathy that meant she was able to communicate easily with a wide range of people from different backgrounds.

Now Frank Sargeson kept that note and it is in his archived papers, and some fools have used their knowledge of this note where she said she was mad for decades to whisper that the 'truth' about Janet has not yet been revealed! There is a smoking gun! They claim that she admitted she was 'mad' despite publicly having denied having the various diseases and disorders and conditions she has been misdiagnosed with over the years by total strangers, based on her fiction and on malicious gossip and just on stupidity.

Oh how those (mostly) men have spluttered with the frustration of not being able to flourish the 'evidence' that Janet wasn't misdiagnosed after all, she was as mad as a hatter! And said so herself!

Copyright law forbids the use of the wording of the unpublished note without legal permission, but the Sargeson 'mafia' have in all sorts of ways hinted at its existence over the years. More fool them, for being as thick as pigshit and missing a simple and desperate pun.

The day after we buried Janet's ashes in the family grave at Oamaru, I had an urgent request from the archive holding the Sargeson papers, to allow a film crew to photograph that note, specifically.

It seemed like the vultures had been waiting until Janet had died.

The misogynist men of NZ Lit had always resented the 'rehabilitation' of Janet Frame from the diagnosis of schizophrenia. They preferred being able to put her in the 'mad' box where her "flashes of brilliance" (CK Stead) didn't outshine their own presumably more rational scribblings.

And that wasn't the last time I have had to refuse permission for that small scrap of paper to be used or misused, more likely. Out of all the great archive of Janet Frame, that note has been the most requested. One curator wanted it to be on display at an exhibition - out of all her great work, the scrap of paper that said "I am mad" was what they felt the public should see.

How advisedly Janet Frame gave her mantle of literary executor to someone she trusted to discourage the misuse of biographical scraps which can be made to fit any agenda. It is the oeuvre as a whole of a great author that is their testament and Frame's body of work tells the truth about her. One angry or distressed note is no evidence for anything.

It takes a really loathesome person to not care for moral law, and indeed it was Frame's nemesis Professor Patrick Evans in his play Gifted who deliberately flouted Janet Frame's moral rights by having a naive actress besmirch Janet's memory by wearing a sign that trumpeted "I AM MAD" as though the real Janet really said that and meant what Frank and Patrick hoped she meant unironically.

Some people aren't very good at irony. This story indicates really how weak-minded but how malevolent the Evansian crusade is, and how ignorant his minions are. But what fun, what a jape it is, to kick a great woman in the teeth and revile her and reject her own witness and deny the truth of her own life story, steal and twist her history and exploit it for their own gain.

The great misogynist battle, and in the 21st century it is alive and well, 125 years after women first gained the right to vote in New Zealand. The co-opting and twisting of the narrative of Janet Frame's life is an unresolved feminist issue.

Well argued, Pamela. Very. So easy - especially in a patriarchal world - for us to cherry pick and distort meaning according to our own preconceptions, prejudgements, prejudice. To exclude and 'otherise'.
So counter to the transformed inclusive society some / many of us would work for, where all have a recognised place, all be angels at the table - and not just awaiting crumbs left behind by the so-called elite. If only...