Larger on the inside 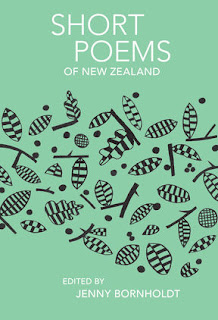 The latest anthology to feature Janet Frame's work is Short Poems of New Zealand edited by Jenny Bornholdt (VUP 2018). Cunningly published just in time for the Christmas market, this is a compact and beautifully designed hardback book with pretty illustrations by the editor's partner Gregory O'Brien... AND A GREEN RIBBON!

Bornholdt restricted her choice to poems with a maximum of nine lines and the result makes for ideal dipping and browsing and yet of course so many of these poems will pull you up and make you stay with them for longer than you might have expected.

As well as the two Janet Frame gems, there are excellent poems from many other top names of New Zealand poetry. I was pleased to see some beloved Kiwi classics there, such as James K Baxter's 'High Country Weather', and other of my personal favourites too, alongside new discoveries. 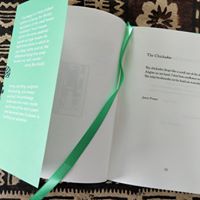 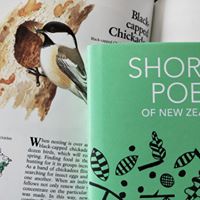 Janet Frame's poem 'The Chickadee' leads off the selection. Frame was an attentive observer of the natural world, including bird life. The Chickadee is a North American bird from the tit family and Janet Frame's description is exquisitely evocative of its flight and of its plumage as it lands in her palm to eat sunflower seeds. In her introduction Bornholdt calls this a poem about the need to nurture our imagination, and it is the genius of Frame that indeed you can draw such an analysis from those few lines about feeding a bird, and being alert and present to that moment.

Available at all good book sellers.
Posted by Pamela Gordon