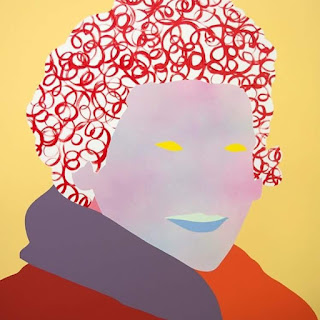 This Wayne Youle 'Pop Art' portrait of Janet Frame is based on a Jerry Bauer photo and appears in a travelling exhibition entitled Strangely Familiar: Portraits by Wayne Youle.

Curated by Helen Kedgley.
Strangely Familiar: Portraits by Wayne Youle showcases bold, compelling portraits of New Zealand art-world personalities including musicians, poets, writers and artists such as Colin McCahon, Rita Angus and Len Lye.
For this new exhibition, Wayne Youle, like many other artists of his generation, looks to Pop Art for inspiration with the bright, saturated colours, hard-edged style and appropriated imagery of his portraits. Wayne Youle is one of New Zealand’s most significant and influential mid-career artists. In this exhibition, he takes the portrait and reinvents it, demonstrating how portraiture can assert itself as a viable and relevant art form today.
Curator Helen Kedgley describes Youle as “A versatile and prolific artist who wants to create a whakapapa of New Zealand artists, past and present, who have shaped our culture in some way. His work is direct, fresh, accessible, often funny and always provocative”.
Wayne Youle was born in Porirua in 1974 and is of Ngapuhi, Ngati Whakaeke and European descent. He was the recipient of the 2010 Rita Angus Residency and the SCAPE Artspace artist-in-residence, Sydney. He now lives and works in Amberley, north of Christchurch. He is represented by {Suite}, Wellington.