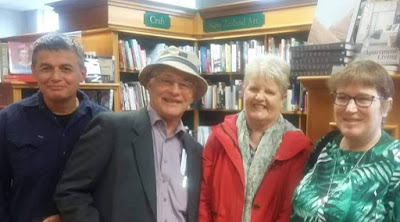 
This week I attended an event in Dunedin celebrating the winners of the Caselberg Trust International Poetry Prize. In my role as Chair of Janet Frame's charitable trust I make a special effort to keep up with and support the activities of the other local literary trusts and The Caselberg Trust is one of these: they do fine work as you can see if you peruse their website. David Eggleton was the 2018 judge of the competition entries and he awarded the first prize to Derek Schulz who travelled to Dunedin to accept his award and read his winning poem 'You Can't Be Here'.

It was a surprise and a joy for me to meet up with Derek Schulz and his partner Jill Studd again after many years. Derek and Jill were close friends of Janet Frame's back in the 1970s and early 1980s when we all lived in Whanganui. We reminisced about the times we all (including Janet) attended public protests against the 1981 Springbok rugby tour and the team's visit to that town. Not an easy thing to do in the provinces. It was heartwarming to hear Derek and Jill refer to Janet as "Jan" which was her nickname among intimate family and friends. So many of Janet Frame's chums are gone now, sadly, but not all of us!
Posted by Pamela Gordon