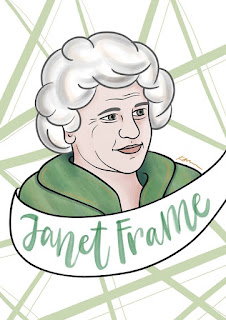 "To celebrate the 125th anniversary of Women’s suffrage in New Zealand, Kate will be illustrating extraordinary women from New Zealand’s history. The text is being researched and written by Kate’s mother Karen Brook. This passion project is done after hours with no funding and aims to create a visually exciting and accessible overview of the role of New Zealand women throughout history."

I love this image of Janet Frame because it avoids the stereotype that the occasional artist can fall into, of making their illustration resemble the actor Kerry Fox who played 'Janet' in the Jane Campion movie more than it looks like the real life Janet - who did live a happy fulfilling life and did grow old and wasn't by any means perpetually tormented.
Posted by Pamela Gordon