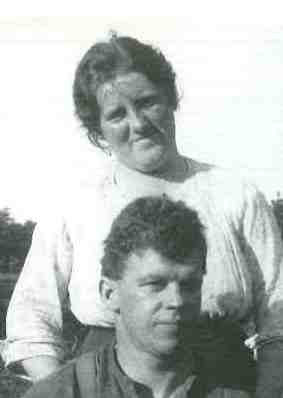 Grandma had grown up in Picton and as a girl she had been a domestic servant for Katherine Mansfield's grandmother Mary Beauchamp. Katherine's family came over from Wellington for summer holidays. Lottie was four years younger than Katherine, and always spoke highly of her and the rest of the family.

I never met my grandmother. The last time my mother saw her, was during a visit to Willowglen at Oamaru, and I was still in utero.

But Grandma Lottie, or "Mother" as Mum and Janet called her, was always a big part of my life. Her stories and her poems and her wise sayings were told and retold, and I felt that I knew her.

And every year Janet and Mum would say, on December the 2nd, "Today is the day Mother died."

When her mother died, Janet Frame was at that time living in Takapuna, boarding with her friend the New Zealand author Frank Sargeson. She lived in Frank's army hut during the week, where she could work in peace, and came to stay with my family in nearby Northcote every weekend.

Some extraordinary tales are told about the 15 months Janet spent at Frank's, by various "witnesses", and over time the anecdotes have been embellished and polished and exaggerated.

As it may come out one day, later rather than sooner, because his masculinist disciples are desperately attempting to hide this truth, Frank Sargeson was a terrible liar and a hysterical anxious man, given to panics and imaginings, and he liked to dramatise his relationship with Janet. His tendency to envy, and to malicious gossip, set the scene for a very patronising and false view of Frame, that endures to this day.

One attitude that re-emerged recently was that Frame was given to "furtively writing" in her shed. This act of creative discipline seemed to enrage the predominantly male onlookers apparently obsessively observing every nuance of her behaviour, and pathologising anything they disapproved of.

I sometimes wonder, when I hear these often misogynist anecdotes about Frame "hiding away", whether the Sargeson acolytes even knew that Frame didn't stay in the shed over the weekends. Perhaps they imagined her locked away in the hut, as they walked around it loudly whispering, wondering how any girl could resist their boyish charms. What was wrong with her, that she should hide away like a hermit when she should - if she were normal - emerge to worship at the altar of their male wit.

But perhaps she wasn't even there!

Another thing the usually demeaning stories never mention, is the fact that Janet Frame's mother died during the time she stayed with Frank.

There's no room on their inhuman pedestal for a grieving, human Janet Frame.

I hope my words do something to challenge the hardened official discourse.

And speaking of hardened official discourses about Janet Frame promoted by the institutional patriarchy, here is my opinion of a document which has emerged from the hallowed ivory towers of academia: it is called Gifted ( but I prefer to know it by the nick-name Ripped Off) and it is the 'novel' published earlier this year by one Professor Evans:

It's a Rip Off
There's currently a despicable travesty of Janet Frame finding favour with New Zealand's chattering classes. It's a pseudo academic "fan fiction"* version of her, cunningly publicised, and unethically claiming to offer insights into the real Janet Frame.

So many facts are changed, but the bloodless inhuman Frame that emerges amuses the ignorant crowd.

And what facts are changed?

The fictional Frame appears out of nowhere and lands on Frank's doorstep.

The real Frame was sought out by Frank because of her fame and her reputation for brilliance. He wanted to have a piece of her and add her to his string of disciples.

The fictional Frame hasn't published yet.

The real Frame had won the national Fiction prize years beforehand for her book of stories, and was publishing frequently in major magazines, had read a story on the radio, and had already gathered a reputation as being one of the "best since Mansfield".

The fictional Janet comes out of nowhere, the real Janet had already established important connections and friendships with literary figures.

The fictional Frame is an inhuman cypher who lives in a fantasy realm on the other side of language and only knows the real world through words.

The real Frame had done substantial time working as a house maid and as a nurse aid to elderly people, and was a human being full of pity and compassion.

She grieved, as one does, when her mother died. Who knows what 'disturbance' that grief was interpreted as.

The fictional Frame is a cartoon character, a puppet. A solitary, and socially inept.

The real Frame was shy at first, and traumatised by the abuses recently suffered, but once she realised she was in company she could trust, she was a voluble, articulate, witty and effervescent companion, who participated fully in the active social life surrounding Sargeson.

One can see why all these facts have been changed, because the fantasy inhuman Frame doesn't make sense if the facts of the real Frame are acknowledged.

The elderly professor who wrote the novel wants his readers to think his puppet Frame is evasive and odd and ethereal, a riddling mystery, austere, out of touch, so he invents the characteristics that will make her seem so.

None of the gross distortions of historical fact have been identified by any of the reviews of the novel. I haven't even seen any debate or discussion of the questionable ethics of reinventing facts about someone who died so recently.

If this were taken as pure fiction, it wouldn't be so bad, but there is a deliberate attempt to blur the reception. The naive well-meaning reader seems to be confusing the Frame of the novel for the real one. Certainly every single review I have seen, has made this mistake of assuming that there can be any insight into the real Frame offered by a novel written about her by someone who has had to represent her even as hiding the fact of having been a patient in a mental hospital.

All reviews have been accompanied by photographs of the real star - Frame herself. There is usually no photo of the author of the novel.

This fictional characterisation of Janet Frame as dishonest about having been recently released from hospital is particularly toxic and unfair, as she was always frank and forthcoming about her experiences in life, with an astonishing lack of self pity considering the abuses she was subjected to.

This deliberate sabotage of the real Janet Frame's known openness and integrity should signal to any knowledgeable reader that a "number is being done" on her, and perhaps they should enquire into the author's motives for wanting to represent Janet Frame as a liar, and as untrustworthy.

Instead, reception seems to have been managed by a controlling discourse suggesting that the fan fic is 'admiring' and 'fond'. Publicity has openly ridden on the back of the great regard Frame is held in, and it has cynically exploited some of the more inane myths about her that are popularly embraced.

The fan fic professor's academic theories have been discredited and discarded by contemporary Frame scholars; from the first his speculative biographical theories were rejected by Frame herself, who despised him for his stalkerish intrusiveness into her private life, and his insulting refusal to accept her word on anything to do with her own life, including his insistence, in the face of incontrovertible evidence, that Frame was peddling a "myth of the misdiagnosis".

So he has had to resort to using fiction to achieve his goal of obliterating Frame's authentically expressed life story and replacing it with his speculations and imaginations. With a foundation of lies and distortions in order to shore it up.

* fan fic (short for fan fiction) is the genre produced when an amateur writer, who is obsessed with fictional characters, actors, or other celebrities, writes his or her own invented scenarios for the characters or the celebrities to act out. The plots often involve sexual fantasies about the objects of the fan's obsession. Fan fic can be "slash fiction" (inventing and describing homosexual acts - often in salacious detail - between fictional characters or celebrities) or het (heterosexual). It's apparently rare for fan fic writers not to indulge their sexual fantasies about the objects of their admiration.

Fan fic is widely regarded as a fairly base form of literature, and these prose exercises are seldom published by any reputable publisher, but are circulated amongst an in group, or available in digital format and online. There are of course ethical issues to do with copyright appropriation and also many find distasteful the crass intrusion of some of the stories into the privacy of living or recently deceased celebrities.

For Frame to have been targeted by a fan fic writer who is publicly passing off his novel, in an online interview, as "Janet Frame's last novel" and who is claiming that he "channeled Janet" in writing it, is frankly, sickening, not to mention delusional. The fact that this book found an publisher opportunistic enough to overlook the moral issues, is not surprising considering Frame's enormous fame and selling power, which guarantees that the books will have a curiosity value based on her reputation alone.

Take away the name of "Janet Frame" and would anyone be interested at all in a rather weak and turgidly written pseudo academic wank? I doubt it.

Titillate the audience with the promise of tittle tattle about one of New Zealand's greatest achievers and best-loved iconic figures, and throw in some promise of gay sex for good measure, and have a fictionalised stand in for Karl Stead leeringly ready and willing to slip the unsuspecting Janet "a sausage" (wink wink) and you might even hit the NZ "bestseller" charts, as Frame always did.
Posted by Pamela Gordon