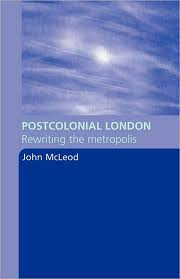 Postcolonial London: Rewriting the Metropolis
by John McLeod (Routledge 2004)
Here's a fascinating study of literary portraits of London. Chapter 2 includes an analysis of some of Janet Frame's writings about London as she dreamed it and as she encountered it:
"London, England: V.S. Naipaul, Doris Lessing and Janet Frame"
This book is a refreshing example of the kind of academic research that respects the agency of authors and the integrity of their work.
"For Frame, the writer must reach beyond a subservience to any specific location - England or New Zealand - in order to arrive at am imaginative space which permits 'primary dialogue' unfettered from the obligations of either place or cultural tradition. In depicting London she attempts to write through the cultural and colonial authority of England in order to reach a new, enabling threshold at the edge of received vision, figured elsewhere as the 'Mirror City'."
Posted by Pamela Gordon at 3:43 PM

And another very famous volume that includes an analysis of JF is THE "The Empire Writes Back"...