Nurse to the imagination 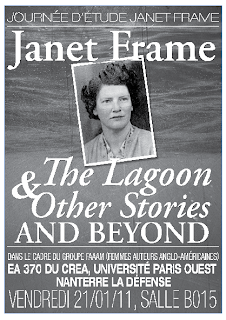 Wednesday the 21st of January 2011
Paris, France
Another Symposium on Janet Frame's writing
Janet Frame wrote the short stories in this classic book, The Lagoon and Other Stories, in 1946 while she was working as a "housemaid-waitress-nurse", caring for elderly people at a rest home in Caversham, Dunedin.

Frame said of this time:

"I had gentleness and everlasting patience with the sick and the old. I enjoyed waiting on people, attending to their comfort, doing as they asked, bringing the food they ordered. I had no impatience, irritation, anger, to subdue; I seemed to be a "born" servant. The knowledge frightened me: I was behaving as my mother had done all the years I had known her, and I was enjoying my new role: I could erase myself completely and live only through the feelings of others." (An Angel at My Table)

There is a widespread and incorrect belief that Frame wrote these stories while she herself was confined in a mental hospital; it's simply not true, of course, in fact as she was the nurse, it's quite the opposite. But perhaps the invention seems more "romantic" to those who spread this and other myths about Frame.

Another fact to note is that Frame wrote this book, that is now on this prestigious syllabus in France, nearly ten years before ever meeting the NZ literary figure who is sometimes erroneously credited with "teaching Janet Frame to write". Apparently Frank Sargeson did arrogantly attempt to "improve" Frame's writing, but fortunately she resisted strongly. He of course resented her failure to submit to his chidings, which has led rise to another bizarre belief: that Frame was a "difficult" house guest. Being stubborn and self-directed, she was undoubtedly difficult to bully, and to mould, which seems to have overly distressed the rather hysterical Sargeson, who clearly blamed Frame for the resulting "tension" in the house.

In writing the Lagoon stories many years beforehand, Frame did acknowledge having been inspired by her wide reading in the classics since childhood, as well as her familiarity with modern world literature, and she also cited her recent discovery of contemporary New Zealand fiction and poetry as an influence, although she insisted that she drew most directly on the stories of American author William Saroyan as a model.
Posted by Pamela Gordon at 4:16 PM