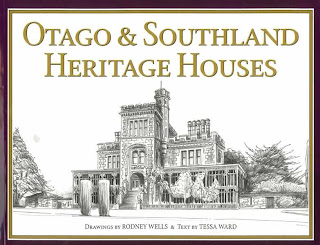 Here's a fascinating and attractive new book featuring many grand houses of Southern New Zealand.
It's full of useful information and interesting anecdotes. I know many of these houses, either because I've visited them or driven past them, or I have read about them. But one delightful and perhaps surprising addition to the fold is the house Janet Frame grew up in:
56 Eden Street, Oamaru
This "humble railwayman's bungalow" is given the same loving attention in research and description - and illustration - as any of the fine mansions featured on the other pages.
I know that many of the visitors to the Janet Frame House (which is open to the public every day in summer between 2pm and 4pm) comment that it is so refreshing to visit a carefully presented historic place that was a home for a working class family. The vast majority of heritage venues of course were built for moneyed and influential families. Several of the other houses have connections to Janet Frame's wealthy friend Charles Brasch and his family.
Illustrious visitors to 56 Eden Street have included New Zealand's Prime Minister (Helen Clark, in 2003) and the Governor-General (Dame Silvia Cartwright visited in 2004).
I sometimes wonder what Janet Frame's mother would have thought if she had heard that the Prime Minister and the Governor-General had taken tea in her dining room!
Otago & Southland Heritage Houses
drawings by Rodney Wells
text by Tessa Ward
The Caxton Press, Christchurch NZ
ISBN 978-1-877303-19-7
More information: Nationwide Books
Posted by Pamela Gordon