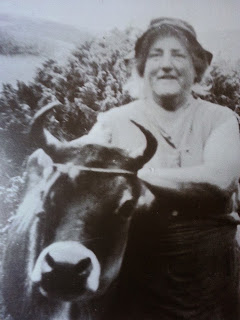 Janet Frame's mother
Lottie Clarice Frame (nee Godfrey)
29 February 1892 ~ 2 December 1955
Janet Frame dedicates chapter 23 of her second volume of autobiography An Angel at My Table to the effect on her of her mother's death, which happened while Frame was boarding at Frank Sargeson's place at Takapuna. Frank didn't have a telephone at that time and so Janet's sister June came in person from nearby Northcote to relay the bad news to her:
I was jealous of my sister’s first knowledge of the death, almost as if it were a treasured gift chosen to be given to her, then passed on, used and soiled, second-hand, to me. It was partly a reawakening of the former childhood rivalries in being first to know, to see, the first to embrace the cherished secret; in fact, the rivalry had never reawakened for it had never slept!
I told Frank my news.
‘So what?’ he said, showing his bitterness towards his own family. ‘Parents are better dead.’
Bravely, I agreed with him.
That night in the privacy of the hut I wept, and the next morning, faced with Frank’s scornful reproaches about ‘all those tears’, I explained that I was weeping for Mother’s life, not for her death.
Posted by Pamela Gordon at 11:09 PM