"to give someone for Christmas" 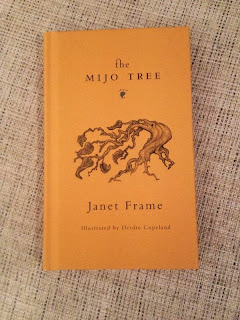 "universal truths for us all - our dreams, desires, failings and hopes - all spelled out in Frame's luscious poetic language"

"You will return to it again and again."

The Mijo Tree has been reviewed by Patricia McLean on the Waxeye Writing Website. It's a thoughtful and informed review, the kind of review any author (or executor) longs to read, where the critic has engaged with the text and the context.

"The book shows again the breadth of her talent; that she could tell a simple, tragic tale that appears at first to be written for children but becomes a dark allegory for pride, pain, disloyalty and death."

This particular paragraph is one of the best I have ever seen on the way that one of the dominant strands of narrative within 'NZ Lit' continues to pathologise Janet Frame and belittle her work:

"Who could blame her for her reticence, given her suffering at the hands of the psychiatric profession and critics who continue to scrutinise her work for signs of madness? It brings to mind R D Laing's argument that the family is the place where madness is constructed in one individual who is set up to represent the mental instability of its other members. If one could imagine the New Zealand literary community as a family, then Frame is the sister labelled mad in order to conceal the madness of the rest."

I once thought that this patronising NZ attitude McLean refers to, to Frame-as-deviant, on the whole belonged to the dark distant past - with the one glaring exception being the notorious Patrick Evans who has obsessively chased Frame for decades waving a metaphorical straightjacket and gag. Apart from Evans, it was only the malicious gossips amongst the "mid-century misogynists" who appeared to need to assuage their envy of Frame's success by attributing her literary achievements to her "mad genius". Alas, ill-informed misrepresentations of Frame seem to be flourishing right now, along with the churlish jaded innuendo that seeps into the communications of the NZ Lit chatterati and twitterati, so it's good to see some opposition to this cultural cringe emerging!

Despite having had only a rare mention so far in the mainstream media, The Mijo Tree continues to feature on the Nielsen NZ Fiction Top Ten Bestseller List - #6 this week.
Posted by Pamela Gordon