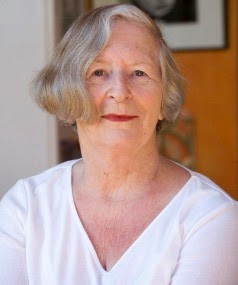 ﻿
Congratulations to author Elizabeth Smither, who has received the 2014 NZSA Janet Frame Memorial Award for Literature.

Judges said Smither was an illustrious poet whose work "continues to go from strength to strength".

Elizabeth Smither is a poet, novelist and short story writer who has recently retired from her librarian role at Puke Ariki in New Plymouth. She said she was delighted with the win. Smither, who knew Janet Frame, having met up with her at the time when Frame lived in nearby Stratford, Taranaki, said "It's just lovely to have an award named after her." (Taranaki Daily News)

Smither intends to use the award, worth $3,000, to help her find the concentrated time needed to work on a new collection of poems.

The New Zealand Society of Authors (PEN NZ Inc) judging panel said they were impressed by the calibre of the applicants for the award, with "many of New Zealand's more distinguished writers vying for this accolade".

The NZSA Janet Frame Award is given every two years and is funded by a gift of $15,000 given to NZSA/PEN by the Janet Frame Literary Trust in 2007.

Coincidentally as I write this (10 December 2014), today is the anniversary of the award of a literary prize to Janet Frame herself, for her first book, by PEN NZ - which was the precursor to the current New Zealand Society of Authors (PEN NZ Inc). 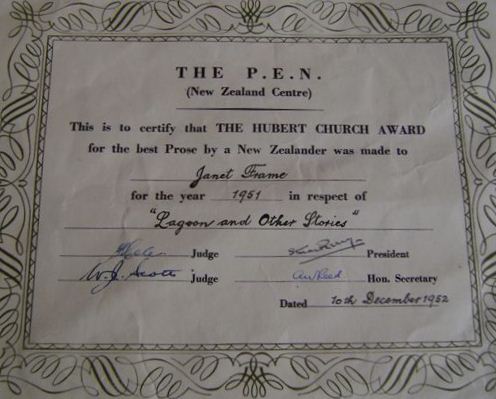 Janet Frame's P.E.N. Hubert Church Award was signed on the 10th of December 1952
For further information on that 'lifesaving literary prize' please see my blog post written on the 60th anniversary.