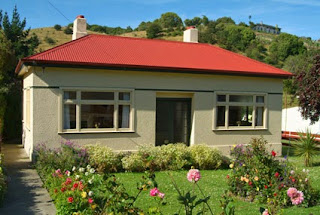 Many sincere congratulations have been expressed lately to everyone associated with the Janet Frame House at 56 Eden Street, Oamaru, which has been open to the public for ten years now.

The 'Friends of the Janet Frame House' last week held a celebration in Oamaru to mark the occasion. Carol Berry, current chair of the Janet Frame House Trust (the charitable organisation that owns and cares for the house) took over the management of the house ten years ago and ably moved it through from the salvage and redevelopment stage to the significant literary tourism status that the house now enjoys. The house was originally rescued by the foresight and generosity of Oamaru resident Eris Servole who noticed it for sale and bought it with the intention of preserving it for the public good. The 'reframing' project was later initiated and carried out by Bill Tramposch and his wife Peggy Tramposch with the help of many other enthusiastic supporters and local stalwarts.

Huge amounts of hard work and loving dedication have been lavished on the Janet Frame house and all this good will is almost palpable as one stands within it in a thoughtfully presented space that is remarkably conducive to reflection.

The house is open to the public for two hours every afternoon during summer and by appointment at other times of the year. Visitors are attracted from all around the world and many state that one of their main reasons for visiting Oamaru - or even New Zealand, in some cases - is because of their interest in Janet Frame's writing. Reading the visitor books can be a moving and enlightening experience. As an author and as a survivor, Janet Frame clearly means a lot to countless people.

A touch of mistaken identity

As Janet Frame's literary executor and chair of her charitable foundation the Janet Frame Literary Trust I have no formal connection with the unfortunately confusingly named Janet Frame Eden Street Trust that owns and cares for Janet's childhood home. The two 'Janet Frame' trusts do tend to get mistaken for each other on a regular basis. Janet Frame herself disapproved of the ambiguous naming of the house trust, which was presented to her as a fait accompli shortly before her death and without her permission. (Janet Frame had named her own trust 5 years earlier and bequeathed her copyright to it.) I have been unsuccessful in entreating the house trustees to accept that the names of the trusts are too similar - they refuse to budge on a name change (even though the Janet Frame estate offered to pay the legal fees) - and so we have, as natural friends and allies, had to learn to compromise and try to limit the occasional damage done by the intermittent cases of mistaken identity that arise. I myself am frequently thanked for the marvellous work I do to care for the Janet Frame house! More seriously, people seeking copyright or moral authority for some project or other that involves a Janet Frame component have been known to seek this permission from the wrong place, not realising that the Janet Frame House Trust does not have copyright ownership and in fact has no connection at all to Janet Frame's estate. Sometimes petitioners have even canvassed the Oamaru Information Centre, and an unwitting employee or volunteer has apparently cried "Oh that sounds lovely!" thus inadvertently giving the impression that Janet Frame's estate has encouraged or approved their idea. The trusts each receive mail and other approaches intended for the other, and journalists occasionally also make the mistake in print or on air.

Another misconception that frequently arises concerning the Oamaru house is that 56 Eden Street house is "still in the family" and that the 'Frame family' still owns it. Some people even think I live there myself! The Frame family never owned the house. My grandparents rented it. It is the Frame fans and philanthropists who are responsible for the house being saved and preserved.

Despite these irritations and inconveniences the trustees of the Janet Frame Literary Trust have consistently supported the work of the Friends of the Janet Frame House over those ten years and long before. When Janet Frame was alive we used to accompany Janet on her trips to Oamaru to check on the progress of the house renovations. I've attended many a meeting in Oamaru to do with the house and have been happy and honoured to be associated with its success. The Janet Frame Literary Trust has always cooperated with copyright permissions where appropriate for the promotion of the house and fundraising for it, and giving support for grant applications and other projects. We have provided advice and information when required. The Janet Frame Literary Trust has also made gifts of thousands of dollars worth of Janet Frame's books to the house trust for their fundraising and for gifts to their many volunteers and supporters, and I have taken part in several media interviews relating to promoting the house and have also attended most of the literary and commemorative events held there. And blogged about many of them!

So, congratulations to all the current and past trustees and friends of the Janet Frame house. We wish you well for your attempt to raise a capital fund so that the house at 56 Eden Street can continue to get the maintenance and upkeep that it needs in order for it to be a suitable place for it to commemorate the life and work of Janet Frame.