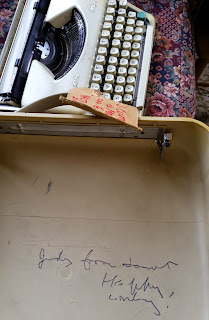 This typewriter (pictured) is a recent gift to the Janet Frame house in Oamaru, made by Elizabeth Hopkins (formerly Judy Hopkins) , the niece of Janet Frame's friend John Money. Janet Frame had sent the 'Olympia Socialite' portable typewriter to the then teenaged Judy in the early 1970s with the inscription insider the cover: "Judy from Janet" and "Happy Writing". The typewriter is now on display at Frame's former childhood home at 56 Eden Street, Oamaru.

The Olympia Socialite was one of the smallest travel typewriters of its time. Janet Frame almost always carried a typewriter with her on long journeys. She composed her work exclusively on a typewriter and even preferred to type her private correspondence.
Posted by Pamela Gordon