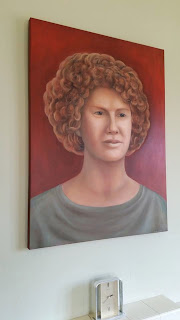 Another recent gift to the Janet Frame House at Oamaru is a portrait of Janet Frame painted by artist Annette Isbey.

The painting is now on display at Frame's former childhood home at 56 Eden Street, Oamaru where it hangs over the fireplace in the reception room.

Here's a link to some more info on Annette Isbey, which gives the context for the stylized nature of the portrait, much in keeping with Isbey's practice ("She is best known for her figurative paintings, works that are often stylized and heavily influenced by ancient Egyptian and Grecian imagery.")

My own opinion is that it is a fine portrait that captures much of Janet Frame as a person and it is also a recognisable likeness of her.

This was a generous gift and is an indication of the remarkable goodwill held by New Zealand's wider cultural and artistic community towards Janet Frame and her legacy and her firmly established position as one of New Zealand's heroes.
Posted by Pamela Gordon