On the rock of herself 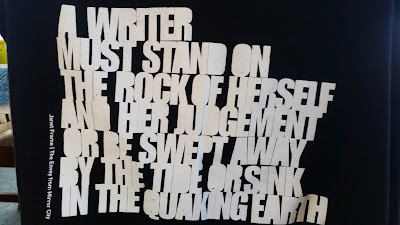 Image: front of a T-shirt produced for the Auckland Writers & Readers Festival 2005

"When the agent and publisher received the typescript of The Edge of the Alphabet, the agents suggested I omit one chapter, the publishers that I enlarge the same chapter; there were other conflicting suggestions some of which I diffidently tried to follow. When the book was published, some reviews said of the now diminished chapter, ‘It could have been longer,’ while others praised parts criticised adversely by the agent and publisher but which I had not changed, while yet others criticised parts that had been praised. This confusing experience reminded me of what I already knew, and strengthened my resolution never to forget that a writer must stand on the rock of her self and her judgment or be swept away by the tide or sink in the quaking earth: there must be an inviolate place where the choices and decisions, however imperfect, are the writer’s own, where the decision must be as individual and solitary as birth or death. What was the use of my having survived as a person if I could not maintain my own judgment? Only then could I have the confidence to try to shape a novel or story or poem the way I desired and needed it to be, with both the imperfections and the felicities bearing my own signature."

~ Janet Frame, from The Envoy From Mirror City
Posted by Pamela Gordon