In defence of Janet Frame and her executor 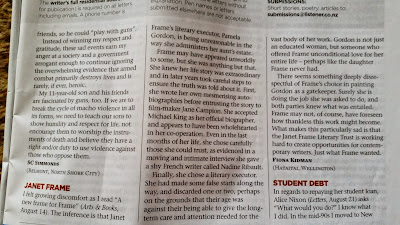 This wonderful letter in Janet's and my defence was written five years ago to the Editor of the New Zealand Listener by distinguished New Zealand author Dame Fiona Kidman.

The letter was published on the 28th of August 2010, two weeks after the Listener had run an opening gambit in a pre-emptive strike against the credibility and status of the Janet Frame estate. This attempt to discredit me personally was presumably intended to weaken any moral objections I might later have wanted to raise against the upcoming Victoria University Press publication of a 'revenge fantasy' novel about Janet Frame that was written by Frame's arch-foe Professor Patrick Evans. VUP editor Fergus Barrowman refused to let me see the novel before its publication and so I declined to comment when I was approached by the author of the article, journalist Margo White. Her report as published was slyly biased against me and against Janet Frame's own agency, although cleverly enough written that no doubt it did its dirty work well.

Another old enemy of Frame's was brought in to add to the character assassination: Professor CK Stead who had once been a good friend of Janet Frame's but who had fallen out with her after taking offence at a fictional character of hers - a portrait of a mediocre poet that he insisted was based on him. Frame consistently denied that she had based the character on Stead, and before long she and Stead had to all appearances patched up their quarrel and renewed their friendship. But after her death he changed his tune and seemed to renew his vendetta. Unfettered by slander laws, he then began to make unpleasant accusations against Frame now that she was not there to defend herself (including the fantastic claim that she had tried to seduce him and that he had spurned her.)

Janet Frame's friend and biographer Michael King would have made short work of the lies and the misrepresentations that these two old enemies of Janet's launched into seemingly moments after Frame breathed her last. But Michael himself died tragically not long after she did. As Frank Sargeson's biographer, Michael had been assiduous in correcting mistakes or misunderstandings concerning Sargeson and he was gearing up to take on this role on behalf of Frame, as a matter of principle and integrity and professional pride.

I have had time in the 11 years since Michael and Janet died to note the truth of the feminist observation that where a woman dares to make a criticism or a correction, she is a bitch or rants or delivers a tirade (she's bossy or controlling), but where a man makes a criticism, he is strong, and authoritative, uncompromising, or conscientious.

That sexism is very much alive in NZ Lit and kudos to Fiona Kidman for noticing the unfairness of the slant of the Listener article. And for having the courage to speak up about it. Fiona has also pinpointed the likely background to the attacks on my authority as Janet Frame's executor: a poor attitude to Janet Frame herself. She identifies a refusal to allow Janet Frame the status of rational human being with a will of her own and with human rights. In her lifetime Frame had her civil rights taken away from her and as a hospital patient she was declared to be subnormal. Something of this attitude seems to persist even today in those who speak of Frame as if she didn't know her own mind and was not deserving of human respect and decency.
Posted by Pamela Gordon