It's a widely varied series, reasonably priced (most available in a choice of ebooks or a small paperback). To date I have most enjoyed reading Barefoot Years, a memoir by Martin Edmond, one of my favourite contemporary writers.

To my knowledge at least four* of the BWB Texts either quote Janet Frame or discuss her influence. And the number is growing. Here they are (with blurbs copied from the publisher's web site): 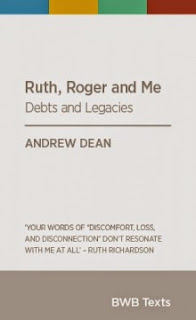 Ruth, Roger and Me: Debts and Legacies
by Andrew Dean
BWB (2015)


‘Your words of “discomfort, loss, and disconnection” don’t resonate with me at all.’ Ruth Richardson to Andrew Dean, 16 December 2014.

A time of major upheaval now stands between young and old in New Zealand. In Ruth, Roger and Me, Andrew Dean explores the lives of the generation of young people brought up in the shadow of the economic reforms of the 1980s and 1990s, those whom he calls ‘the children of the Mother of All Budgets’. Drawing together memoir, history and interviews, he explores the experiences of ‘discomfort’ and ‘disconnection’ in modern Aotearoa New Zealand.

‘Andrew Dean reveals what life is like for many New Zealanders who grew up in the shadow of Douglas and Richardson's reforms. This is a refreshing and important contribution to the national conversation.’ Morgan Godfery

[Dean quotes from and discusses a Janet Frame short story that is relevant to his theme. It's great to see the huge resource of her writing being used to enhance a political and social analysis. It is time to  move beyond the facile myth that all Frame ever wrote about was her own childhood, as she made such piercing and wise observations about society and human nature.] 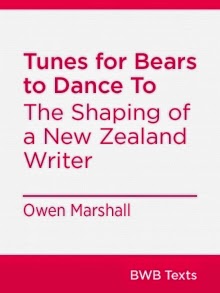 Tunes for Bears to Dance To: The Shaping of a New Zealand Writer
By Owen Marshall
BWB (2014)

I became aware of the fallibility of the real, that the splendidly detailed objective world of sound and colours, shapes and textures was not completely opaque, and that beneath it could be glimpsed the shimmer of things of great horror and ineffable joy.

He is one of New Zealand’s finest regional writers and a master of the short story, but despite his many accolades Owen Marshall continues to write under an assumed name.
In this BWB Text Marshall reflects at length on his writing career, on the forces that have shaped him as a writer, on his intense admiration for Janet Frame and on his decision to concentrate on the short story form. 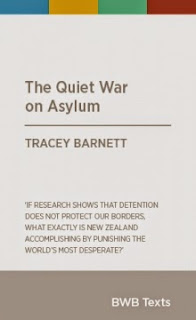 The Quiet War on Asylum
by Tracey Barnett
BWB (2013)

This eloquent and passionate work documents how we have strayed from a humane policy towards asylum seekers, following the same sad and discredited path as Australia.’ Joris de Bres, Race Relations Commissioner 2002-2013

Why would a country that has never had a boatload of asylum arrivals in modern history suddenly legislate for mass detention? Treading across the refugee camps of Burma and Thailand, to Australia’s detention centres and back to New Zealand, Tracey Barnett looks hard at this controversial new policy. She speaks to asylum seekers, refugees, NGO workers and migrants – people on the move and on the ground. Their lives and stories reveal a reality more complex than the political rhetoric, and one that questions how fair and ethical New Zealand really is on the world stage today.

[Barnett quotes from Janet Frame's Living in the Maniototo in which an immigrant to New Zealand describes the process of being considered as an acceptable future citizen.] 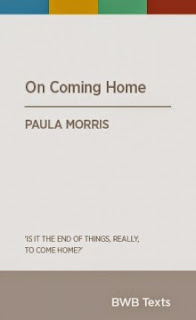 The declamatory return; a homeland as a “wearying enigma”. This all makes sense to me. The New Zealand that’s home to me may be a place of sheep and rugby and number-eight wire, whatever that is, but it’s also none of those things. Am I still a New Zealander?’

Award-winning writer Paula Morris confronts long-standing fears of what it means to return home. Is ambition and adventure being traded for a ‘forever home’ of commitments and compromises? Will she still belong? And will the belonging impose its own restrictions? Morris seeks answers in the words of writer exiles as she narrates her own return to New Zealand. Now a settler not a visitor, she questions incisively the very idea of ‘belonging’.

[Paula Morris draws widely on other writers for her own meditation on themes of exile and return. Among those authors is of course Janet Frame who also lived 'overseas' as an expatriate but eventually felt the draw of her native land, a process she described in her 3rd volume of autobiography The Envoy From Mirror City.]

*UPDATE: Since I posted this notice I have become aware that a 4th BWB  title name checking Frame's work has just been published, the Paula Morris noted above.
Posted by Pamela Gordon