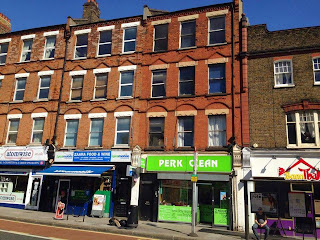 20 Fortess Road, Kentish Town, London
My niece Hannah Taylor was in London recently and sent me these photographs of the flat where Janet Frame had lived above a shop (which was earlier a hairdresser, then a dress shop, now a dry cleaner).

In 1958, "at 20 Fortess Road, she found a room to let in a second-ﬂoor ﬂat above a shop. It was occupied already by three other women: a teacher, a librarian and an ofﬁce worker. Frame’s room was small and looked out onto a brick wall. She shared the bathroom and kitchen with the other tenants. She told John Money that there were Italian children next door, whose chattering was audible, and that the landlord lived upstairs. The latter ‘listens, listens, in case someone is sneaking a sixpenny bath free, or switching on what should be switched off, or leaving things where the typewritten notice warns Please Remove . . . [He] has an electric meter for a heart; it is common in London.’  The ﬂat was quiet when the other women were out at work, however, and Frame resumed writing, initially verse."

(Michael King, Wrestling with the Angel: A Life of Janet Frame, 2000) 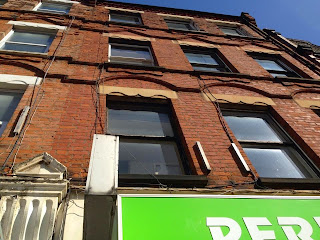 Excerpt from Janet Frame's 3rd volume of autobiography The Envoy From Mirror City about her life when she lived in Kentish Town:
I renewed acquaintance with the poet Ben who introduced me to a friend, Lawrence, recently returned from living for twelve years in the United States, and as both Ben and
Lawrence, like myself, had no regular work, and as they lived north of Kentish Town, they formed the habit of ‘dropping in’ to the flat in the early morning on their way to town, that is, to their haunts in Soho where they usually met other unemployed poets and painters and sat and talked in the French café where the customers always pointed with pride to the famous Ironfoot Jack, reputed to be a member, past or present, of the underworld. Often after giving Ben and Lawrence a cup of coffee, and feeling reluctant to face the Kentish Town brick wall, I’d go with them to Soho where we met an assortment of people whose ambition was to write or paint or compose, and I felt at home with them, yet saddened by their everlasting dreaming, their talking about what they hoped to produce when they knew clearly (as I knew) that while they talked and dreamed, their work stayed untouched in the loneliness of their bedsitters or their poky gasreeking flats with share bathroom share kitchen share everything. My Kentish Town wall wasn’t the only formidable opponent to my working – dreaming was easier, though I did not voice my dreams. I regularly bought the weekly literary magazines and the London Magazine that had begun a series entitled ‘Coming to London’ recording the experiences of famous writers in their early days. I read eagerly of their experience with editors, agents, publishers while mentally composing my own ‘Coming to London’ which I would write one day and which would be full of references to poets and novelists I had met, with casual references to ‘my publisher’ (preferably Faber and Faber). ‘Having lunch with my publisher one day . . .’
Indeed I dreamed.

When Lawrence began to look on me as his ‘girl’ I was agreeable but lukewarm, refusing to put myself again in danger of another pregnancy but willing to be comforted and to comfort, naked body to naked body. When Lawrence began arriving at the flat at half-past eight in the morning on too many mornings, Millicent expressed her disapproval, Jane also did not think I should entertain a man so early in the morning. Only Gloria, in the end room and apart from the others because she, too, had ‘entertained men’, understood, and she and I, like two sisters, had many confiding talks. During the day Lawrence and I would take the usual route to Soho followed by a ‘gallery crawl’ inspecting the new paintings in each gallery. This was his duty, he said. Someone must take the responsibility of looking at new paintings otherwise they hung there, with people perhaps glancing at them, but few getting to know them, and it was a dismal experience for a painter to realise that no one bothered to look at his work. The painting suffered too, Lawrence said. Just ten or fifteen minutes was enough to restore life and hope to an abandoned painting and through it, renewed life to the painter alone in front of his easel.
Through Ben and Lawrence I met many of the ‘outsiders’ of Soho. Following the publication and popularity of Colin Wilson’s The Outsider, there was some prestige in being ‘outside’, quite unlike my experience in New Zealand when the prestige lay in being ‘inside’, although when one has the prestige of being ‘outside’ one is then ‘inside’ the ‘outside’ . . . I visited sleazy clubs, becoming a member for the evening to gain admission. I met prostitutes, male and female, and I listened to their stories, gaping impolitely as I cherished my growing ‘experience of life’ and quoting to myself on many occasions,
‘I sit in one of the dives on Fifty-Second Street . . .’
The direction I had set myself, however, was too clear for me to be waylaid for long. Wasn’t it time I applied myself to my writing? 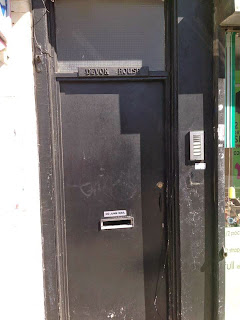