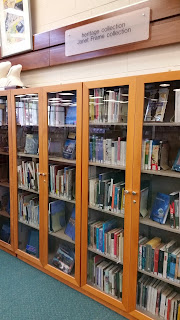 
In a 1975 TV interview Janet Frame said "I read every book in the Oamaru Library."

She was recalling the year in which she became the Dux of her primary school and won a free subscription to the Oamaru Athenaeum as it was called then.

This close Janet Frame connection with the Oamaru Library (and her continuing affection for it throughout the rest of her life), and the fact that enthusiastic librarians had already developed an impressive collection of books and other material by and about Janet Frame over the years, gave me the idea to develop the relationship further. Over the past years I have donated a large stock of Janet Frame's past published works from her own archive, consisting mostly of foreign translations and overseas English language editions of her work, many of which would be otherwise hard to acquire from within New Zealand. Where possible I have also offered the library copies of the newly published foreign editions and translations continually being received by the Janet Frame Literary Trust as we administer Frame's ongoing publications and translations.

The result is the Janet Frame Collection, housed in a handsome glass case and available to library visitors. The Collection can be searched on the library's database or consulted by visitors to the library. Library staff tell me the Collection is increasingly well used and is an eye opener to locals and tourists alike, many of whom had no idea of the extent of Janet Frame's international and local publishing achievements.

Here are a couple of my earlier blog posts about the Collection: