Poetry while you wait 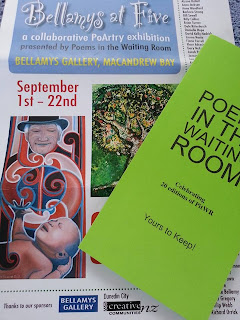 Congratulations to Ruth Arnison on five years of producing Poems in the Waiting Room, a free poetry brochure distributed to medical waiting rooms and rest homes in New Zealand (mostly in the South Island, but the distribution - which relies upon charitable donations - is growing!)
Recent brochures have been produced in a Braille edition.
The 20th issue (Spring 2013) has a poem by Janet Frame and coincidentally also has a poem by Janet Frame's friend the late Grace Paley, an author and political activist Janet Frame became close to after they met in the USA at a writers colony.
The name 'Poems in the Waiting Room' has been kindly sublicensed by the original operation that has been successfully supplying poetry pamphlets in the UK for many years. (More info here.)
The Dunedin-based Poems in the Waiting Room is holding a PoArtry Exhibition to celebrate the 20 poetry cards produced in five years.
Poets and artists have collaborated for the exhibition which is to be held at Bellamy's Gallery, Macandrew Bay, Otago Peninsula, Dunedin, opening on Sunday September 1st at 5.30 pm and running until the 22nd of September 2013.
Posted by Pamela Gordon at 2:10 PM