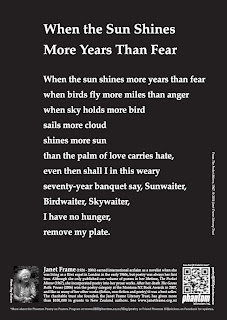 Janet Frame was born on the 28th of August 1924, and this year to honour the anniversary of her birth our friends at Phantom Billstickers have released another Janet Frame poem poster: 'When the Sun Shines More Years Than Fear' as part of their wonderful Poems on Posters project.

'When the Sun Shines More years Than Fear' is from The Pocket Mirror (1967) and when Janet Frame was planning her funeral service she approved it to be read out by one of her loved ones.