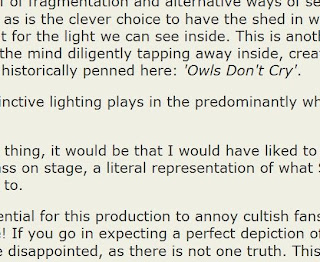 Review of Gifted by Holly Shanahan

There's an amusing and instructive howler in the latest of a small flurry of fatuous and sycophantic reviews of the Fortune Theatre's production of Gifted.

Frame's first novel is referred to as 'Owls Don't Cry'. Shanahan had already told us:  'The play paints a rich portrait of a historical character [Sargeson] I know little about', and she also makes her crushing ignorance about Janet Frame very clear too, by her gushing praise of the dramatic portrayal of Frame as basically disconnected and bonkers. Shanahan does not even seem to have the wit to ask herself how she can 'know' that she has viewed an accurate characterisation of the two literary giants, given that she clearly knows nothing of their real history and relationship.

The Janet Frame impersonator Sophie Hambleton also admitted in an interview that she knew nothing about Frame and had not even read anything by her. Such is the lack of biographical and literary expertise at the coal face of this lush and loving production that so utterly takes the public representation of Janet Frame right back to the era of sexism, provincial narrow-mindedness, judgmental conformism and malicious gossip.

What a terrible waste of so much energy and good will. These audiences seem to believe they are getting an 'education' about Janet Frame, when what they are getting, is unadulterated propaganda in a plate of revenge served very cold indeed.

Shanahan suspects that the play might "annoy cultish fans of Frame's" because it is not a "perfect depiction of historical truth". She says "cultish fans" as though she has already been brainwashed by one of Patrick Evans's mantras, the ridiculous claim he often makes that Frame has but a small readership. His own crass exploitation of Frame's vast fame and literary reputation gives the lie to that one.

In defence of the fact that she feels she knows Frank and Janet better now even though she is aware there is some 'fiction' going on (she's obviously not sure what has been changed but surely St Patrick knew what he was doing!), Shanahan declares: "there is not one truth".

Wasn't Pontius Pilate the last to say something like that, when he washed his hands of the persecution of Jesus of Nazareth? "What is truth, anyway?"

Holly Shanahan and Sophie Hambleton would recognise truth in their own lives if it was perverted, and they would squeal too if I were to write up their lives, or someone they admired and cared about, with exactly the same degree of deceit and dishonesty that Patrick Evans has applied to his telling of the story of Janet Frame.

Janet Frame recognised that Patrick Evans was hell bent on distorting the truth about her, and she complained about it when she was alive.

Does Holly Shanahan even know that Janet Frame and Patrick Evans had a decades-long "literary feud"? How can she seriously believe that Evans would all of a sudden write a "love letter"?

Here is what Shanahan has 'learnt' about Frame from viewing Gifted:

"Right from her entrance, shrouded in the typical headscarf and glasses, she is a sea of contradiction and curiosity."

"the clever choice to have the shed in which Janet writes closed to us completely, but for the light we can see inside. This is another device that leaves us wondering about the mind"

"small fragments of insight into this young mind"

"We meet her mind through the word games she leaves for Frank, and her 'insights' into the relationship of words, art and life"

"I would have liked to see some real garden, some dirt and grass on stage, a literal representation of what Sargeson is attempting to bring Frame back to"

"a reflection of the fragmented world of the woman herself"

Anyone who knows even a little about the real Janet Frame can see that Shanahan has taken away a grossly patronising and pathologising portrait of Janet Frame. She doesn't know that Frame was not fragmented or disconnected either from people or life itself, or, for heavens sakes, from the earth itself!

I was always told that there is a difference between "stupid" and "ignorant". I am not calling Shanahan stupid, but I am calling her ignorant (she said so herself when she admitted to knowing little about the characters of Sargeson and Frame). Stupidity cannot be cured by information, but ignorance can. Ignorance cannot be cured by watching a play that has been designed to make you accept a heavily biased viewpoint. It can't be cured by reading Wikipedia or listening to hearsay.

I hope that Shanahan follows her resolve to learn more about Janet Frame, and that she does that by reading her work rather than reading about her or watching cartoon versions of her in plays and movies. I recommend Frame's autobiography as a good start. It is in every public library, as are good selections of Frank Sargeson's stories.