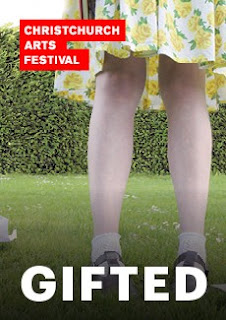 The first image above is of the cover of the American edition of Janet Frame's selected short story volume Prizes published by Counterpoint Press in 2009.

The second image above is the poster for the play Gifted by Patrick Evans being toured around New Zealand in 2013 by Dunedin's Fortune Theatre Company.

The first represents the real thing, the literary product of a highly acclaimed international author, a respected and loved cultural icon in her native New Zealand for her courage and perseverance in overcoming early abuses and setbacks to become a successful world writer.

The second image is derivative and exploitative, and the play it advertises constitutes a further abuse - this time of Janet Frame's legacy and her memory - because of its deliberate distortions of verifiable historical facts.

The play, which is being promoted by the use of a fake Janet Frame quote, is allegedly 'about' Janet Frame and yet it deliberately changes and suppresses major known facts about her life and career.

The actors and the playwright apparently revel in their act of 'mythologising' of Janet Frame's story as you can hear for yourself in this radio interview with them:

"People need to remember it's fiction not fact."

People also need to ask themselves, why would the academic Professor Evans, who has been engaged in a forty year feud with Janet Frame, who in her lifetime resented his stalkerish speculations about her history and rejected them vigorously, want to deliberately muddy the biographical waters with false "facts" and "quotes" and invented episodes?

Where is the humanity? Where is the respect for a great New Zealander? Who would want their own mother or sister or aunt to be treated like this, famous or not?

It is even controversial to mess fictionally with the known details of historical figures from the Victorian era. But Janet Frame still has family and friends who are alive, and who are bewildered and hurt by the nastiness of this attack on her integrity.

Janet Frame lived very recently, she is not a far flung cipher from the past.

I speak for many people, and not just those who knew and loved Janet. Many of her fans also hate to see her misrepresented and mocked so soon after her death by one of her most notorious enemies during her lifetime.

In the radio interview aired yesterday, Professor Evans was careful to stress that his play is "fiction". But this contradicts his video interview on the Christchurch Arts Festival website in which Evans claims that everything he has written is "plausible", and that nobody knows the truth anymore.

He cannot seem to make up his own mind; is it fiction or not?

Major supporters of Gifted, such as the Christchurch Arts Festival Director Philip Tremewan, seem to be quite deceived concerning the nature of the play. Tremewan has said: "We are mindful of the Janet Frame heritage. We want to do nothing more than honour our greatest writer." Does that sound like he knows that Gifted is fiction?

In what way is a derogatory remake of the meeting between Janet and Frank, changing so many of the known facts, a "tribute" to either of them, when this event was already probably one of the most highly and carefully documented ones in the history of New Zealand literature, having letters, films, two autobiographies and two biographies plus eyewitness reports and documentary films based on it already?

I have listed some of the biographical distortions Evans employs in an earlier blog post, which also lists three main points I made that were censored by the Christchurch Press news report about my opposition to the publicity around the play Gifted.

I am quite pleased, on hearing the radio interview, that at least Patrick Evans has been forced to admit publicly that he made his play up, and that the character is not the real Janet Frame.

However it was bizarre to hear Evans justify naming his bogus Janet after the real Janet Frame by claiming that she had put real people in her fiction. So it was OK for him to do it to her.

What infantile "logic" (delivered in the tone: "she did it first! Nyah nyah nyah!").

What Evans has done is unusual.

The identity theft by Evans of a real person (Frame) who died less than ten years ago, and the deliberate corruption of the facts about her life and work, is a pretty much unique act of exploitation, especially when you learn the background of Patrick Evans having written an unauthorised 'biography' that Frame was appalled by, and that was full of mistakes.

The Fortune may well next be unearthing a play script written by a neo-Nazi about the life of Anne Frank. Hahaha, what a comedy that will be. 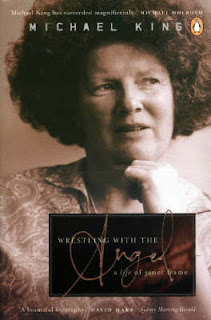 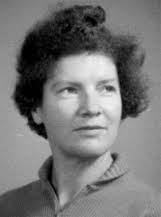 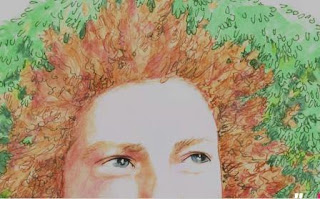 This image is a rip-off of the above photograph, and fittingly is taken from an advertisement for the Fake Fortune Frame.