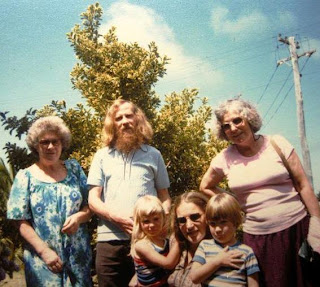 Janet Frame (far left) snapshot with extended family members, Whanganui
Janet Frame was queried in a 1983 interview in Whanganui about the fact that she was widely believed to be a 'recluse'. She answered that the term was really too strong for her because she liked to socialise, but that the misperception was also useful because it allowed her to get on with her work:


There’s much misunderstanding of writers. If you say you’re a boot maker, nobody asks, ‘What are you doing?’ They can see. But people are afraid of imagination. They can’t see what is going on, and it frightens them. It’s mainly only writers themselves who know what it’s like – it’s just a job, but you’re working with the invisible.


I have to build a fortress around myself – it’s the only way I can get anything done.


I know if I had a family I’d never get anything done. I feel I’m much like my mother for she denied herself, actively effaced herself for the ones she loved. I thought that would happen to me, and so my writing has always come first.

From 'Secret' Life in Suburbs (1983) quoted in Janet Frame In Her Own Words (Penguin NZ, 2011)
Posted by Pamela Gordon