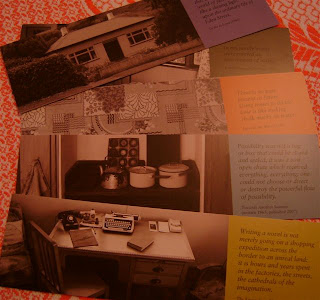 A lovely set of five book marks has been produced for the Janet Frame House at 56 Eden Street Oamaru, thanks to funding from the Real NZ Festival.
More information can be obtained from the Eden Street Trust's website here.
Each bookmark has a quote from Janet Frame and a photograph of the house or surroundings.
The quotes are:
In my family words were revered as instruments of magic
~ Landfall essay 'Beginnings' (1965)
Writing a novel is not merely going on a shopping expedition across the border to an unreal land: it is hours and years spent in the factories, the streets, the cathedrals of the imagination
~ The Envoy from Mirror City (1984)
Possibility was not a bag or box that could be closed and sealed, it was a vast open chute which received everything, everything; one could not choose or direct or destroy the powerful flow of possibility.
~ Towards Another Summer (written 1963; published 2007)
There is no past present or future. Using tenses to divide time is like making chalk marks on water.
~ Faces in the Water (1961)
I wanted an imagination that would inhabit a world of fact, descend like a shining light upon the ordinary life of Eden Street.
~ To the Is-land (1982)

Hi Pamela,
I think the Janet Frame House has some technical problems with their website. I tried to look at the bookmarks but could not proceed and the page froze. Seems to be not downloading properly.

Thanks for noting that. It seems to be working OK for me. The link on their website is to a pdf file so your computer may not want to download such a file from an unknown source. Also you would need an adobe reader of course.

I'm sorry my snapshot of the bookmarks isn't very good!

The house website also has a link to the bookmarks pdf on their front page:

You can also email them and order a set if you're keen.