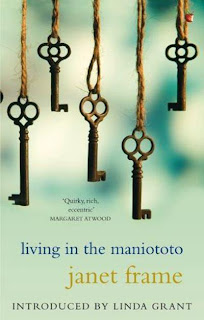 Regarding the title of Living in the Maniototo (1979), Janet Frame said:

"I wanted a Maori word to get into the American newspapers"

(From a 1985 feature interview with Stephanie Dowrick printed in the Sydney Morning Herald. Cited on page 132 in Janet Frame In Her Own Words, Penguin NZ, November 2011)

And so the Maori name Maniototo ('bloody plain') did get "into the American papers" - a more rare feat back in 1979 than it might be over thirty years later, in 2011. Amongst other US publications, there was a review - as always - of the internationally acclaimed New Zealand author Janet Frame's latest novel in Time magazine.

Margaret Atwood reviewed Living in the Maniototo for the New York Times Book Review. She called it ‘quirky, rich, eccentric, nervous and sometimes naive, like a cross between Patrick White’s novels and Stevie Smith’s poems." Janet Frame's scintillating new novel with the Maori word in the title was also reviewed in the New Yorker (‘a clever, high-spirited performance . . . her readers [are kept] happily alert to the cross-currents of her intellect, her imagination, and her memory’, as well as in the Los Angeles Times and the Kirkus Review and others.

Over thirty years later the New Zealand Maori language - once looking endangered after colonial onslaught - is flourishing, and so - arguably - is the literature of New Zealand, which will feature as the guest nation at the 2012 Frankfurt Book Fair.