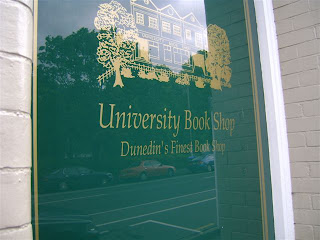 There's a marvellous bookshop in Dunedin, situated on the edge of the Otago University Campus: The University Book Shop (fondly known as 'The UBS'). It's one of the best bookshops in New Zealand actually, and frequently wins prizes for that. I'm a frequent visitor and frequent purchaser too. They always have some new release that is just too tempting. They generously host book launches for the many excellent authors who live in Dunedin. The staff are friendly and knowledgeable and love books, and if they don't have what you're after then they'll get it for you. They have a good stock of Janet Frame In Her Own Words located on NZ books new releases table near the front door!

But the Paper Plus in the heart of town, in the Golden Centre Mall also has an excellent selection of New Zealand books for sale, and with a strong fiction and poetry section. In fact they have all Janet Frame's New Zealand editions on their shelves. There are seventeen Janet Frame titles in print in New Zealand currently, so that's a remarkably well-stocked shelf, and Paper Plus Dunedin provides a much better turnout of Frame's books than many an independent bookshop that might normally think they were entitled to look down their noses on such a mainstream franchise store. Not this one though! Go Golden Centre Mall Paper Plus! I hope you have lots of literate and discerning customers who will appreciate the service you offer! 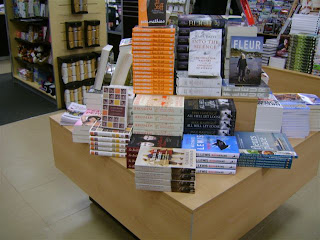 Paper Plus Dunedin (Golden Centre Mall) finds space on their NZ non-fiction new release table for Janet Frame In Her Own Words, among the cookbooks, earthquake mementos, and rugby albums. Bravo for a chain store to extend themselves beyond the blatantly commercial!
Posted by Pamela Gordon