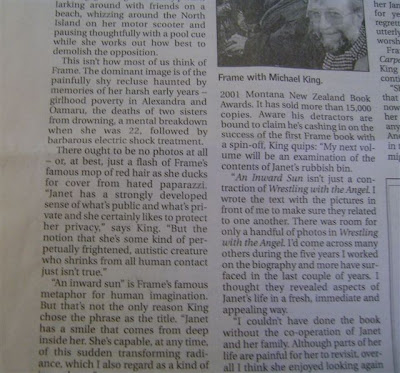 "The notion that she's some kind of perpetually frightened autistic creature that shrinks from all human contact just isn't true" ~ Janet Frame's biographer Michael King to Iain Sharp, quoted in 'In the Frame' Sunday Star-Times, 15 September 2002.

It's a seductive theory and it has had two or three aggressive advocates whose passion for their fantasy about Frame to be correct, is strong to the point of virulent, and is not apparently subject to reason or evidence.

They will even invent support for their theory, as in the case of autism researcher Hilary Stace who has been quoted in the New Zealand Medical Journal no less, as saying this:

"I discussed the possibility with [the late] Michael King who indicated agreement, mentioned she had shown interest in autism since the diagnosis of her great niece, but suggested it was best not to publicise my research as it might upset members of her family."

Stace put those false words into Michael King's mouth not just in the medical journal, but also in a letter to the Star-Times, and elsewhere on the internet.

I wrote to her at the time saying that I had been close to both Janet Frame and Michael King and the suggestion was ludicrous that Michael might have bought into the idea that Janet had high-functioning autism or Asperger's syndrome.  I knew him too well and he knew Janet too well, and I had spent a lot of time in their company and had discussed topics like this with them both, together and separately. But Stace continued to make this claim that [the late] Michael King had supported her, despite admitting she had no evidence for it.

(Just as there is no evidence for the conspiracy theory that somehow there was a diagnosis that for some reason the family or estate was or is "hushing up"... as if we care for anything but the truth!)

I still consider it an outrage that Stace has misused Michael King after his death to slander Janet Frame's family. What Stace has written is untrue and unfair and Michael was not there to contradict her. Her claim that there was a hush-up was basically an attempt to neutralise my objection to the offending Sarah Abrahamson opinion article and characterise me as merely having an emotional reaction rather than one based on fact and experience. I was cruelly accused of feeling "shame" at my daughter's autism and of being in denial of Janet's supposed autism, also apparently through disgust for the condition of autism in general. How can one counter such ad hominem and underhand tactics? I was advised to withdraw from such a toxic battlefield and so I did.

But, what about Janet Frame herself, who did not die until 2004, and so was one of the "family" and yet doesn't seem to figure as an important component of Stace's anecdote or of Michael's warning? It's instructive that Stace ignores Frame's possible reaction to her essay at the time she showed it to King. While Stace is claiming that Michael said that members of the Frame family will be "upset" if she makes her "discovery" public, Frame herself was still alive and well! And yet the "family" who will be "upset" doesn't seem to include the subject of the spurious diagnosis! Stace has so internalised her psychological projections onto Frame, it never even occurs to her that - if Michael ever made a warning - that the warning might have been that Frame herself would sue Stace if she were to make an unfounded public medical diagnosis. (Janet was ever ready to sue anyone who had public claims about her medical status - she was heartily sick of their unwarranted intrusions.)

Why would Frame's family be bothered?  It also shows that Stace has a patronising view of Frame as incapable of having her own reaction - perhaps Stace believes the mythologised nonsense that Frame led a dependent and protected life and wasn't fully in control of her faculties? Is Stace's stereotype of Frame as isolated and passive, why Stace can so blithely label Frame against her will and without consulting her personally, and expect to publish her 'research' without inviting Frame's fury and possible litigation?

Or did Stace imagine Frame would be thrilled that at last someone has "understood" her? Little wonder she has had to invent an obstructive family to protect herself from the realisation that Frame would not in fact welcome being slapped with yet another misdiagnosis yet again made from misconceptions and without proper investigation.

Michael most likely pussy-footed around the subject to protect Stace's delicate ego. It wouldn't have been the silliest theory he had heard about Janet Frame and he had learnt to be tactful when he was regaled by someone with a fanciful anecdote or belief.

I've said it before - it's the Kerry Fox Janet (from the movie) these people count as their intimate pal who would be relieved - in their fantasy - to hear they (alone) truly understand her. It's a compliment to Fox's acting - and of course to the brilliance and immediacy of Frame's writing, that sensitive souls feel so close to their "Janet".

In real life, Frame was a strong self-directed person and none of her family would have dared to try to interfere in her affairs. Nobody 'guarded' her. She was top dog. It just shows how much these people think they know Frame as a person, and how little they attribute her any agency and self-direction. She's a puppet to them, and it surprises them that she had the intelligence and foresight to leave a legal structure in place after her death to prevent just their kinds of attempts to exploit Frame and misuse her copyright. They're annoyed by the opposition they encountered and they personalise it to me as person and mother and try to discredit me.

Well it's hard to refute a claim that has no basis in fact. Which is why most knowledgeable professionals have steered away from this 'debate'. They can see it has no validity. It is pretty hard to counter a scientist who invents their data, and that's pretty much what these people did in their campaign, including 'diagnosing' a cultural legend rather than investigating what the real person was actually like.

It's not the first time an autism debate has been found to be based on an untruth.

Anyway eventually "the truth will out": that is a firm belief and comfort of mine. And so early last year I came across evidence in the historical record that in 2002 Michael King had refuted the use of the word "autistic" to describe Janet. It may well be argued that Michael was not using the word 'autistic' in a scientific sense - and he clearly wasn't - but Hilary Stace has already told us that King had earlier read her research arguing that Janet Frame was on the autistic spectrum, so we must acknowledge that King was not ignorant; he had been presented with the theory in an academic context, including a technical definition of the autistic syndrome or disorder, so he knew what was at stake when he rejected the notion that Janet Frame was "autistic". And thanks to Stace's letter to the NZMJ, we know for sure that Michael was au fait with the syndrome, so when he is rejecting the notion that Janet is autistic, he is also rejecting Stace's theory!

In many respects I have a great admiration for Hilary Stace and her work in the community, but she has made a mistake here. I wonder if I will ever get an apology for the way she misrepresented Michael King as well as me and my family?

For further reading, please refer to my post of January 2010 for an earlier discussion of this proof that Michael King did not in fact believe the autism hypothesis was warranted, including my rejoinder to an 'anonymous' commenter who ignores all the subtlety of Michael's argument and evidence, and mine, and launches an irrelevant and self-contradictory attack on us both: 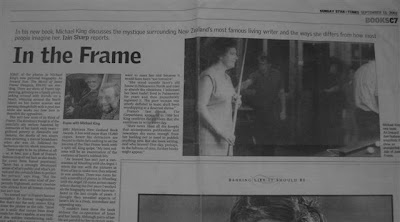