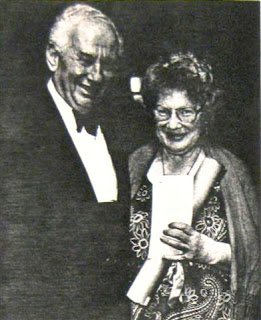 Arts Philanthropist Fred Turnovsky and Janet Frame at a Wellington Award Ceremony, 1984
'The ODT' - The Otago Daily Times - is frequently referred to as "The Oddity" by those familiar with it.

New Zealand's oldest daily newspaper celebrates 150 years of publication this very day, and there have been festivities and commemorations in the weeks leading up to this milestone.

When she was a little girl my mother June misheard the name Otago Daily Times and thought it was the "Tiger Daily Times" (a linguistic phenomenon now referred to as a mondegreen).

The Otago Daily Times was an important part of the Frame family life - in fact as far as I know Janet Frame's first published writings appeared in the pages of that paper - by the time she was ten years old old she was regularly sending letters and poems to "Dot" of Dot's Page. Along with her four siblings, Janet was one of 'Dot's Little Folk' or DLF for short.

The Frame family also had a tradition of writing letters to the editors of newspapers and Janet's mother Lottie used to fire off stern letters whenever an occasion demanded it. Janet Frame herself took up this practice as is so well attested in the new book Janet Frame In Her Own Words which includes a selection of Janet Frame's letters to the editors of publications, written over fifty years of her life (from the age of 10 to the age of 60).

So Janet Frame, probably the greatest writer so far to emerge from New Zealand, who was born in Dunedin and died here too, had a long a fruitful relationship with the local newspaper the OTAGO DAILY TIMES, the first publication where she saw her name (as well as her pseudonym AMBER BUTTERFLY!) in print.

For the 150th anniversary the ODT has raked through the 150 years of issues of the paper to pick out some representative and notable news items and today the paper was bulging with a commemorative edition: a varied and rich smorgasbord of reprints of significant stories from throughout those 150 years.

News isn't just about war and sport and disasters and new buildings and commerce; arts and education and cultural pursuits must figure too, so I was curious to see what the journalists would choose to include from the many dozens of reports about Janet Frame over the years (if indeed they chose to recognise her at all - which was always a possibility - we all know the saying that "a prophet isn't recognised in their own hometown"!)

Reporters would have had to select a Janet Frame-related item from an awful lot of material: from her childhood correspondence to 'Dot's Page'; to her first notice in 1952 that her book THE LAGOON had won the Hubert Church Award for prose; to the notices about and reviews of her twelve novels and her five books of stories, her two books of poetry, her children's book and her three books of autobiography, as well as the film adaptation made of her autobiography. Then there were the conferences and books published about her writing, and the celebrated biography by Michael King, launched in Dunedin at a party attended by Janet Frame and by the Prime Minister Helen Clark. Also there were the documentaries made about Frame, and the prizewinning Vincent Ward film and the Globe Theatre dramatic production, both based on her novel A State of Siege. And many classical musical adaptations of her poetry and a couple of documentaries were made about her life and work, all rating notices and reviews.

Then there were the interviews and reports: her triumphant return to NZ in 1963 after 'becoming famous' overseas - or her return to live in Dunedin a couple of years later to take up the Burns Fellowship - or the various other literary and civil honours and prizes and awards and fellowships she picked up over the years. There was of course the CBE investiture and later the Order of New Zealand bestowed by the Queen. Each notable event in Janet Frame's stellar career merited a bit of a write-up in the ODT - as well as other NZ newspapers too of course. A highlight for Janet Frame - and Dunedin - would have been the bestowal of the honorary doctorate from Otago University in 1978. Frame later was awarded another doctorate and a medal from two other universities, but the prestigious honour must have been especially sweet coming from her home town university - the one where as a young woman she had studied English, Education, Philosophy and French.

There were overseas fellowships too, and the Commonwealth Literary Prize for Best Book in the late 1980s. Appearances at Festivals, and overseas honours as well as the constant stream of prizes for her books. All would have their notice, and often a photo, in the ODT.

And then in her later years Janet Frame returned to live in her home town of Dunedin and was frequently snapped around town for the pages of the ODT - attending a Mayor's reception, attending the ceremonies for writer's walk plaques of her old friends including Charles Brasch, Ruth Dallas and Hone Tuwhare. Then she attended the Burns Fellow reunion in the late 1990s and was snapped with all the other old Fellows - she was the esteemed elder of the tribe as one of the younger ones put it. And she attended book launches and art gallery openings in Dunedin, and in Gore, with her photo taken or a few words spoken to a reporter frequently making the pages of the ODT. And she was in the news again whenever it was rumoured she was on a "short list" for the Nobel Prize in Literature, there being a particular fuss about that in 2003.

And then she fell ill and died in the arms of her family, at Dunedin Hospital. Being widely accepted as one of the great writers of the 20th Century, the news of her death flashed around the world and obituaries appeared in every major paper from the New York Times to the Guardian to the Sydney Morning Herald. Then there was her state memorial in 2004 held at the Dunedin Town Hall, attended by the Dunedin mayor, the Prime Minister and the Governor General, and televised live for the rest of the nation with a live satellite feed overseas picked up by the BBC and other news organisations. That was big news locally, nationally, and internationally, but in the way of a great writer, whose words are their legacy and so they never really die, it wasn't the last the ODT had heard of Janet Frame, because there's been a steady stream of posthumous publishing, of news from the estate and from awards given by the charitable trust Janet Frame set up. Her significant archive of papers and correspondence was bequeathed to the Hocken Library. And in the town where she grew up, Oamaru, her childhood home has been rescued and has become a cultural tourist attraction visited by fans from all around the world, and news of which frequently features in the regional pages of the Otago Daily Times, its geographical reach still encompassing Oamaru as it did when Janet Frame was a child writing to its children's page.

The item chosen by the ODT to appear in their birthday edition today was suitably representative - it was a report from June 9, 1984, of Janet Frame winning a major prize for "Outstanding Achievement in the Arts", endowed by philanthropist Fred Turnovsky

In the ODT's quirky fashion the item referred to Janet Frame as "Miss Janet Frame" - an anachronism by 1984, and it seems a patronising way to refer to such a renowned author, but the conservative and fiercely provincial and independent ODT was the last newspaper in NZ to adopt the "Ms" usage and it was not their policy to attribute Janet Frame with the title "Dr" despite her several honorary doctorates.

(The photo above is from Wellington's Evening Post , taken at the award ceremony held later that year.)
Posted by Pamela Gordon