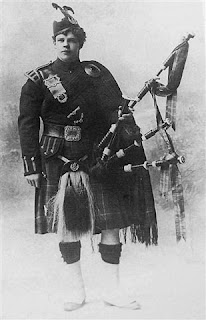 There's a Scottish Festival on currently in Janet Frame's city of birth Dunedin - 'the Edinburgh of the South'.

Dunedin New Zealand today still retains strong characteristics of its role as one of the settling places of "the Scottish Diaspora".

Scottish historian Tom Devine will give several addresses on such topics as : The "Death" and Reinvention of Scotland; The Lowland Clearances and the Scottish Exodus to New Zealand; and The Puzzle of Scottish Sectarianism. He will also promote his new book To The Ends of the Earth: Scotland's Global Diaspora. 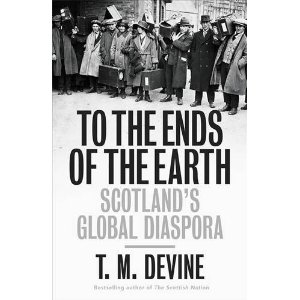 Janet Frame was a typical product of the Scottish immigration to New Zealand. Janet Frame's grandparents Mary Paterson and Alexander Frame travelled to Dunedin, New Zealand, married here and had twelve children, one of whom was George Samuel Frame, Janet Frame's father, who was a dedicated player of the bagpipes (as you can see in the photograph above).

Mary Paterson had worked in a Paisley cotton mill from the age of eight and in 1874 she made the journey to New Zealand as a domestic servant on the Mairi Bhan. Three years later, at the age of twenty-one, she married Alexander Frame who originated from Hamilton in the Clyde valley in Scotland. (His four older brothers also left Scotland, but they all settled in North America, three in the US and the fourth in Canada.) Mary was illiterate when she arrived in New Zealand but by the end of her life she had learned to read and write and had worked as a midwife in Port Chalmers, Dunedin. Alexander worked as a blacksmith. (For more details see chapter 1 of Wrestling with the angel: a life of Janet Frame by Michael King.) 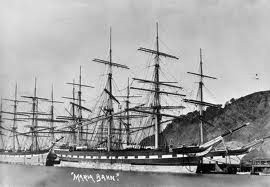