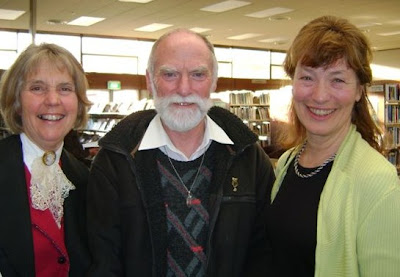 I had the great pleasure this week to attend a celebration at the Oamaru Public Library. The function was held to open the new display housing for two special collections: a heritage collection and a Janet Frame collection.

The Friends of the Waitaki District Libraries had been involved with the fundraising for the new cabinets, and they invited me to speak and do the honours at the opening of the Janet Frame cabinet.

It was a fine event attended by a crowd of people I always feel very at home with: people who hold books, reading, history and culture near to their hearts, and who are generous with their time and effort in preserving and promoting local heritage.

Mayor Alex Familton took the time to attend the celebration, signalling his encouragement for acknowledging and protecting those important records of the town's rich past.

There were many supporters and friends of the Janet Frame House present, including the indispensable trio pictured above: JFEST Chair Carol Berry and Trustee Alison Albiston, along with the inimitable curator and guide Ralph Sherwood.

My fellow speakers Dorothy and Kahren also number among the volunteer guides who host the house when Ralph has an afternoon off.
In my speech I told the gathering that in video clip number 2 of the TV interview that as of last week is now archived online, Janet Frame tells the story about receiving a year's subscription to the Oamaru Library as her prize for being Dux of Oamaru North Primary School.

"I read every book in the Oamaru Library" says Janet on screen. First she read through the Juvenile section, and then the Adult section. "And the smaller the print the better!" she says, giggling.

Looking around the recently refurbished, spacious and well-stocked Oamaru Library of today, it's doubtful that even the most dedicated bookworm could manage that feat any more!
How fitting that Oamaru now honours Janet Frame's connection with Oamaru, when so much about Oamaru, especially her education at its schools and the literary knowledge she absorbed through her membership of the library, contributed to her development as a great writer. And in her writing she has immortalised Oamaru, as I reminded the audience by reading some of her choice descriptions of the town. They particularly enjoyed hearing about the delights of Oamaru's Friendly Bay compared with Timaru's Caroline Bay.
I last spoke at the Library just over 2 years ago at the invitation of JFEST. At that time I shared with the audience some of the many and varied aspects of the role of literary executor for a major author. This time, I was able to update the gathering with news of the posthumous publishing successes of Oamaru's famous daughter.

Local independent bookstore Adams Take Note held a book stall offering a comprehensive selection of books of local interest for sale, along with a line-up of current Janet Frame books (for New Zealand, Random House have an impressive 15 separate volumes in print). 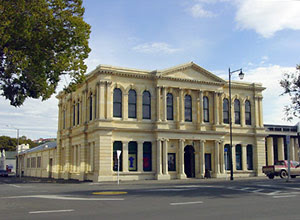 The building that housed the Library when Janet Frame was a child, now functions as the North Otago Museum