A catch phrase on my candle 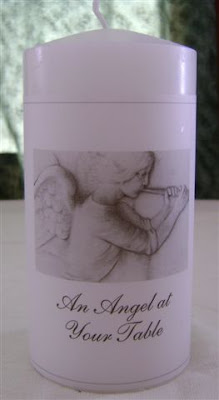 Here's something I wish Janet could have seen.

She didn't shock easily, because she had an enormous ability to imagine multiple possible outcomes in her own life, the lives of other people, and in the world generally. (As does any fine novelist, of course.)
But I don't think even she could have predicted this. I would have enjoyed hearing her say a surprised and embarrassed "Good Lord!"
I found the candle recently while browsing in a religious book store for a gift. It was a Catholic Shop, of the type that Janet and I enjoyed browsing in many years ago when I first discovered Catholicism. Janet became very interested in sharing my journey of education about the Church.
I'm not even sure that this particular appearance of the catchphrase isn't just a coincidence. But the truth is that the catchphrase itself is well embedded into New Zealand (and Australian) culture.

As a former linguist, I've enjoyed watching the growth of the format "An X at Y's Z" in New Zealand popular culture. Hardly a week goes by without some example of it in publishing, online or in the print media.
Of course the link with the original quote is usually tenuous if not non-existent. But there's something uniquely Kiwi (as Kiwi as Janet Frame!) about the flavour of the formula, and I guess that's why it crops up so often.
There have been NZ book titles based on the formula (Aliens at my table: Asians as New Zealanders see them; and A Dagg At My Table: Selected Writings by John Clarke).
Episodes of the cult Kiwi TV cartoon series Bro' Town have been called A Maori At My Table and An Alien At My Table.
Whenever I see fresh examples I collect them, and I have quite a file of them. Just the other day a feature in the Sunday-Star Times by columnist Steve Braunias was given the headline AN ACTOR AT MY TABLE by sub-editors (5 October 2008).
Janet did live to see and be bemused by the growing phenomenon. For instance one year the capping show at the Otago University was titled "A Wombat at my Table". 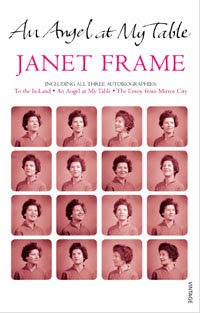 In her usual self-deprecating fashion Janet used to protest that she was being falsely attributed the expression, which had come first from a poem by Rainer Maria Rilke. Janet loved Rilke and his poetry. The particular poem was one of his French language ones, found in the collection Vergers. 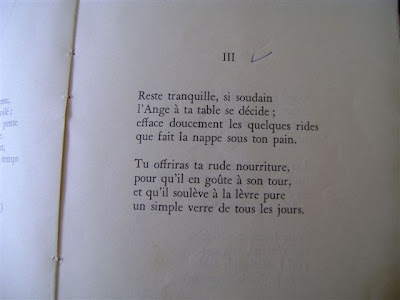